Star Wars: The Clone Wars game coming to Wii and DS in fall 2008 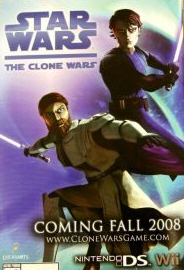 IGN reports that the Star Wars: The Clone Wars movie and animated TV series take place between Star War Episode II: Attack of the Clones and Star Wars Episode III: Revenge of the Sith. The movie and series is set to star such recognizable Star Wars characters as Anakin Skywalker and Obi-Wan Kenobi as they do battle across the galaxy. The feature film and series sport a stylized look less realistic than previous Star Wars movies.

Since the movie will debut in theaters on August 15th in North America, with the TV debut following on September 1st on Cartoon Network. Each episode will be 30 minutes and “there will be at least 100 episodes produced” according to Star Wars creator George Lucas himself.