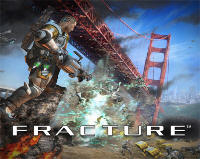 Denny Thorley, president of developer Day 1 studios, starts the new Fracture video with a run-through of the game’s futuristic premise, set in the year 2161, where ecological and seismological disasters have radically altered the planet’s landscape, and a clash in ideologies has split the USA into to rival factions which clash in a huge war with genetically modified soldiers.

After that various team members talk about the new destructive technology called the Terrain Deformation system. This has you use a gun called the Entrencher to create hills and craters in the ground and generally strategically reshape the surroundings on the fly. This throws up interesting battle scenarios as you pull up parts of the ground to create cover, or solve puzzles as you dynamically manipulate the environment.

This Fracture developer webdoc gives a behind the scenes look at the creation of Fracture.

The following trailer describes how the definition of what it meant to be human was put to the test.