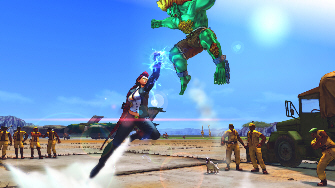 We thought it was time to list the Street Fighter 4 characters below that have been confirmed for the Xbox 360, PlayStation 3 and PC versions of the fighting game that came to Arcades in July 2008. The home versions (with added online multiplayer) will be released in America on February 17th, and in Europe on February 20th, 2009.

——> NOTE: We also have a guide that explains how to unlock all Street Fighter 4 secret characters.

When you click on each Street Fighter 4 character’s name below, a window will pop up with a picture of him / her.

New characters are:
1. Abel
2. Crimson Viper
3. El Fuerte AKA The Strong One
4. Rufus
5. Seth AKA The Puppet Master is the final boss

Even if those or some of your other past favorites do not return at the time of release, they might still appear later on. How? Street Fighter IV producer Yoshinori Ono is also looking into the possibility of using microtransactions for future downloadable content updates which might include new characters and stages, but that’s ultimately up to Capcom. February 18, 2009, update: Mr. Ono told Japanese gaming magazine Famitsu the following about T. Hawk and Dee Jay: “The development team said, ‘We want them in!’ Honestly, we did the modeling up to the pre-texturing. We made the fight settings for T. Hawk in Street Fighter IV… If users make their voices heard, this prep work is something we can revive at anytime.”

Watch parts of various introduction matches between the Street Fighter 4 characters that show off the game’s art style:

Watch the Epic Return trailer with music from Faith No More:

(*) Akuma and Gouken were confirmed in this trailer:

(**) Street Fighter 4 producer Yoshinori Ono had a panel at the San Diego Comic-con 2008, during which he hinted Cammy, Akuma and Ken & Ryu’s master Gouken would appear in the home console versions of the fighting game. He confirmed Cammy at the end with the premiere of a new animated video centered largely around Chun-Li, Guile and Cammy. The video reveals the game’s plot includes Cammy finding it suspicion that M. Bison’s Shadaloo organization was destroyed at the end of Street Fighter II, yet neither his body nor those of his lieutenants have been recovered

February 17, 2009, update: With the game now available, let’s start exchanging Xbox Live gamertags and PSN IDs. The below list will make it easier for everyone to fight against fellow fans.

Leave your own gamertag or ID (and system) in the comments to be added!