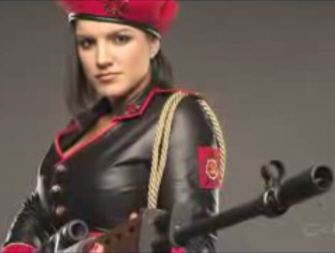 Gina Carano AKA Crush is set to play the Soviet Commando Natasha in Command & Conquer: Red Alert 3‘s campy FMV live-action cutscenes. The Russian hero Natasha Volkova will be portrayed by MMA fighter Gina Carano, known as Crush on American Gladiators, who will be carrying a Soviet Dragunov rifle on-screen and supposedly as a playable unit in-game as well.

Carano said: “Natasha is such a cool, powerful character, her actions definitely speak louder than her words which is something I definitely identify with. I can’t wait to see how everything turns out and I hope all of the gamers out there have a great time wreaking havoc as me.” — Red Alert 3 is coming to PC, Xbox 360 & PS3 in early October 2008.

Watch the Natasha unveiling in Battlecast PrimeTime episode 10, with David Silverman interviewing her.

I suppose our next question should be if Kari Wuhrer will return as Tanya on the Allies side?