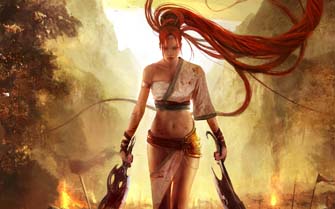 So what will the next game from Ninja Theory be? Apparently they are not working on the previously planned Heavenly Sword 2, although the brand is owned by Sony and they might ask another developer (or Ninja Theory) to make it in the future. Ninja Theory’s new IP will be an unknown Xbox 360 and PS3 game.

To quote studio co-founder Nina Kristensen: “We’re certainly targeting a triple-A blockbuster, with two and a half years in production – a big game that builds on our core strengths of story-telling, cinematics and combat. But we’re actually looking at something in addition to that – we’re considering opportunities in creating a CGI movie using the game engine alongside the game itself. The game’s certainly the most important thing, and we haven’t decided for sure to do this, but it’s something we’re looking at. It’s an interesting idea.”

The studio plans to keep the high-end, really engaging approach of Heavenly Sword, by working with the best talent from the movie industry as they go forward on their new project, according to Gamesindustry.