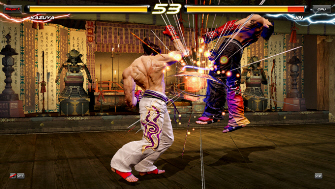 Tekken 6: Bloodline Rebellion will have the largest number of characters ever seen in a Tekken game with a total of 43 or more characters, according to director Katsuhiro Harada (who also did Tekken 5). All Tekken 5: Dark Resurrection characters will be returning (except Jinpachi Mishima) with 8 new additional characters added. Namco Bandai’s fighting game is expected to arrive on PlayStation 3, Xbox 360 and PSP on October 27th, 2009 (way after Soulcalibur IV’s release).

When you click on each Tekken 6 character’s name below, a window will pop up with a picture of him / her.

As well as the Cardboard Tube Samurai (from the Penny Arcade webcomic) as an extra downloadable costume for Yoshimitsu for people who pre-order the game at GameStop (along with a Tekken 6 calendar bonus).

According to Tekken 6 director Katsuhiro Harada, the concept of unlockable characters is outdated, and as such Tekken 6 will have these 40 characters playable right from the start!

Here’s an introduction of the new characters in Tekken 6. The first new character, Zafina, is a female who will have moves Harada likened to that of a “spider” and who enters the tournament to prevent the clash of the “two evil stars.” The second character, Leo, is a German who is intended to be a character who can be played by beginners and experienced players alike. The death of Leo’s mother prompts Leo to begin investigating the Mishima Zaibatsu. The third character, Miguel, is a Spaniard with a passion for fighting, but no real discipline. Miguel wants to exact revenge upon the death of his sister at her wedding. The fourth character, Bob, is an American who is known as a martial arts genius. Due to being unable to defeat larger opponents however, he disappeared from the fighting world, determined to increase his weight and power while still maintaining speed. Bob enters The King of Iron Fist Tournament 6 to test his new skills. Azazel is the final boss of the game. Azazel’s story is said to be related with Zafina and Julia Chang’s story in Tekken 6 and the confrontation between Jin Kazama and his father Kazuya Mishima. NANCY-MIS47J is a hidden sub-boss, whose story says she is an upgraded version of the Jacks for the Mishima Zaibatsu. The official Tekken 6 website shows one more space on the selection screen which may be used for Azazel or another unlockable character.

Watch 9 minutes of Tekken 6 fighting gameplay from the arcade version that was released in Japanese arcades on November 26th, 2007. It includes a look at the full character select screen as well.

Tekken 6’s storyline has also been reported by Wikipedia: “Jin Kazama has been revealed as the winner of the King of Iron Fist Tournament 5, and has begun using the Mishima Zaibatsu for world conquest, declaring war on several nations and even space colonies until the entire world is at war.

Meanwhile, Kazuya Mishima has discovered the division of G Corporation that tried to kill him, and takes his revenge by murdering them all. Kazuya then takes control of G Corporation and uses it as the only power in the world to counter the Mishima Zaibatsu. By this time, the world sees G Corporation as its only saviour and Kazuya is viewed as a hero, although his true intentions are to kill Jin and steal his part of the Devil Gene to stop him interfering with his own plans for world domination. Using G Corporation’s newfound popularity to his advantage, Kazuya puts a bounty on Jin’s head, dead or alive. — Jin, having anticipated this, announces the King of Iron Fist Tournament 6 to rid himself of Kazuya and his enemies once and for all.”

Update July 24: In an interview with GameEX Magazine, Haruki Suzaki revealed that Tekken 6 is currently scheduled for December 2008, and when asked if it was still a PS3 exclusive, Mr. Suzaki replied “No, It hasn’t been determined yet as of the moment.” So Tekken 6 might be coming to Xbox 360 as well, although with the Arcade version not even out, I’d expect the PS3 game in Q1 2009 at the earliest.