The latest issue of UK gaming magazine Xbox World 360 will have a preview of Resident Evil 5, sister publication GamesRadar prematurely revealed the Xbox 360 and PlayStation 3 survival-horror game will feature full online co-op throughout the entire game. Here are some choice quotes that also reveal the return of the Mercenaries mode and a 2009 release date.

The article reads: “If it wasn’t for the new features the game would read like a massive re-skinning job, but thanks to the inclusion of God Hand’s dodging abilities and a fully integrated online co-op story there’s enough on the new features front to avoid those damning accusations of cashing in on the same idea. 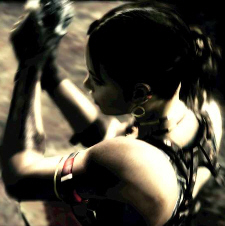 Or should we say maternal? It all depends on whether you’re Player Two or not. Joining Chris’ fight is a new female character. Now that Chris has a partner, he needs to keep in constant touch. He has both a Bluetooth headset (and phone) and a walkie-talkie; one is for chatting with the female mercenary and the other for speaking to the outside BSAA contact, Metal Gear Solid codec style. Currently nameless, the mercenary’s inclusion means that, for the first time, you’ll be able to tackle a true Resident Evil game co-operatively online. Like Gears of War, the entirety of Resident Evil 5 features jump in/jump out gameplay with the AI taking over the reigns of our mysterious female mercenary when you’re playing alone.

[While the game will still lack strafing;] New to Resident Evil 5’s combat system is [a cover system with] the ability to lock to a wall and fire around the corner. [And the ability to duck and dodge using the right analog stick] 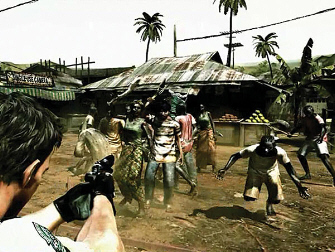 With all this excitement it’s easy to forget the rest of the package. Resident Evil 5 doesn’t just feature a story; there’s the returning Mercenaries minigame and a whole host of other extras that are still safely under wraps. We’ll admit to being just a wee bit concerned when it was revealed Shinji Mikami would not be heading up the production of Resident Evil 5, but in spite of this loss on the development team the game is looking like the ultimate game of the series.” — Quotes via Neogaf

That’s as much as I’ll quote without spoiling the story, but 1UP has some more details on locations and characters.