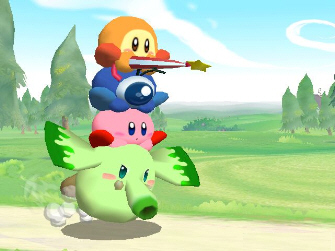 After making the Kirby’s Air Ride racing game, developer HAL Laboratories started on Kirby’s first full-scale action game. The tentatively titled Kirby Adventure was originally announced back in November 2004 for the Nintendo GameCube. The game later showed up in February 2007 on a Japanese 2007 release list as a Nintendo Wii port titled Hoshi no Kirby (translates as Kirby of the Stars). So we’ll nickname the game Kirby Adventure Wii for now. Lastly in December 2007 Nintendo of Japan’s schedule (page 9) confirmed that the game has been delayed to 2008 (and later 2009).

Our enemy-inhaling and morphing friend’s game had a variety of modes, including a substantial single player experience and a wild multiplayer adventure for up to four players. With the Wii’s focus on family-friendly multiplayer games, and Kirby’s huge fanbase dying for a new game, we’d expect Kirby Adventure Wii to be revealed at E3 in mid-July 2008 right next to the rumored 2008 release of Animal Crossing Wii and maybe even Kid Icarus Wii.

Kirby Adventure’s story begins when Kirby sets out to get the stolen Warpstar back from King Dedede. It’s tough going for Kirby when he’s on his own… so it’s a good thing he can catch a ride on the backs of his helpers. Utilizing a new attack system, Kirby can gain power by riding on up to three helpers. The more helpers, the more powerful the attack. It’s up to Kirby to save the beautiful world of Dream Land.

The cartoony and colorful GameCube version seemed to be running on the Super Smash Bros. Melee engine, so a Wii version could be in development on the Super Smash Bros. Brawl engine. In general there always seems to be a side-scrolling Kirby platformer in development at Nintendo/HAL, so it’s most likely that this GameCube port’s release was delayed from 2007 to 2008 for added Wii-controls and polish. The GameCube game Super Paper Mario was also successfully ported to the Wii, as was the GameCube’s DK Bongo Blast that showed up as a renamed Donkey Kong Barrel Blast on Wii.

Check out all Kirby Adventure GameCube pictures at IGN.