The Mummy 3: Tomb Of The Dragon Emperor videogame revealed for Wii, PS2 and DS

Sierra has announced the development of The Mummy 3: Tomb of the Dragon Emperor videogame adventure based on this Summer’s $100 million budgetted blockbuster, the third The Mummy movie, from Universal Pictures starring Brendan Fraser and Jet Li. The game, which will mirror the fast-paced action and adventure depicted in the film, is being developed by Eurocom Studios for the Wii and PlayStation 2 and by A2M for Nintendo DS. With The Mummy: Tomb of the Dragon Emperor movie coming to theathers on August 1st, the videogame is expected to be available in America from July 22nd and in Europe from August 8th, 2008. 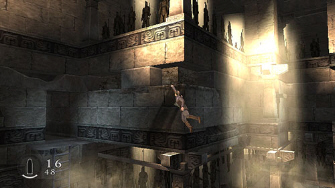 In the third-person action-adventure game The Mummy: Tomb of the Dragon Emperor, players will take on the roles of Rick O’Connell and his son, Alex (played by Brendan Fraser and Luke Ford, respectively, in the film). Gamers will follow the lead characters on their harrowing journey – across exotic locations from ancient Chinese catacombs to beautiful, but dangerous, Himalayan peaks – to defeat the revived servants of the Dragon Emperor (Jet Li). The Mummy: Tomb of the Dragon Emperor allows players to switch seamlessly between gunplay and hand-to-hand melee attacks, and also features a fast and fluid combat system and an arsenal of weaponry that can be used to vanquish the many bone-chilling enemies players will face during their journey. Fans will fight their way through The Mummy universe by utilising combat, puzzle-solving and hieroglyphic decoding gameplay elements.