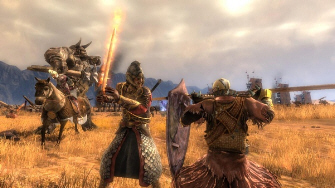 Pandemic Studios (a division of Electronic Arts) has announced The Lord of the Rings: Conquest for the Xbox 360, PlayStation 3, PC and Nintendo DS. The action game is set for a global release in fall 2008.

In a partnership with New Line Cinema, The Lord of the Rings: Conquest is an action-packed game created by the same Pandemic Studios team behind the best-selling Star Wars Battlefront and Star Wars Battlefront II titles. Set in J.R.R. Tolkien’s “The Lord of the Rings” universe as depicted by the Academy Award-winning films, players will finally fight the entirety of these epic battles any way they want. In addition to crusading as the heroic forces of good, for the first time ever in a ‘The Lord of the Rings’ action title they’ll conquer Middle-earth while playing as the legions of Sauron’s evil army, including Cave-trolls, Oliphaunts, the Balrog and Sauron himself.

“Our Pandemic Studios creative teams have years of expertise bringing giant battlefields to life,” says Andrew Goldman, Pandemic Studios co-founder and general manager. “We’ve always wanted to harness our experience in a fantasy universe with warriors, archers, mages and castle sieges. Of course, there is truly no better fantasy world to recreate than the enormity of Tolkien’s ‘The Lord of the Rings’ realm.”

“We’ll freely admit that we’re rabid fans of The Lord of the Rings fantasy,” says Josh Resnick, co-founder and general manager at Pandemic Studios. “Our experience creating massive, rich, action-packed games means that The Lord of the Rings: Conquest will give fans exactly what they want: full control of the blade, bow and magic to fight its epic battles any way they want – even if they choose to play from the evil side.”

The world premiere of game footage and the first trailer for The Lord of the Rings: Conquest will premiere exclusively on Spike TV’s GameTrailers TV with Geoff Keighley on Friday, June 20th.