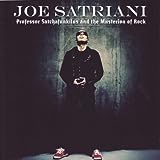 Guitar World magazine asked former Rolling Stones and Deep Purple lead guitarist what he thought of two of the biggest pop-culture phenomena Guitar Hero and Rock Band. After which the solo guitarist, who just released his 13th album “Professor Satchafunkilus and the Musterion of Rock” last week, gave some news on Guitar Hero IV and Rock Band 2.

To quote Joe Satriani answer: “It’s funny you ask: Both game systems have just licensed “Satch Boogie” and “Surfing With the Alien” for upcoming versions.” No specifics were given as to what song will be in what game.

Watch him play Surfing With the Alien: