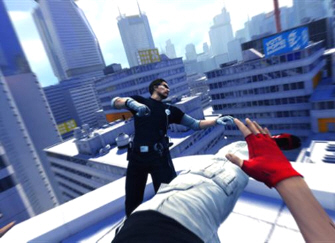 Electronic Arts’ DICE Sweden studio is working on the exciting single player game Mirror’s Edge. It’s a complex first-person action-adventure set in a dangerous open world and boasting tremendous levels of (parkour-like) freedom and interactivity. Supposedly Mirror’s Edge will be out in 2008 on PlayStation 3, Xbox 360, and PC.

The storyline in Mirror’s Edge goes as follows: In a city where information is heavily monitored, agile couriers called runners carry sensitive information on foot via the rooftops and skyways. Usually the police leave them alone – they have bigger fish to fry – but now something has changed… You play as Faith, the best and most agile of all runners, in an adrenaline-fuelled race to save her sister’s life as she unveils a bigger plot involving the whole city and the runners. Mirror’s Edge is an action-adventure game that revolutionizes the genre by introducing a full body experience with dynamic 1st person movement and combat, in an immersive modern-day universe and with a socially charged storyline.

Check out the first ever gameplay footage of Mirror’s Edge featured at a Sony press conference held on PlayStation Day 2008 in London.