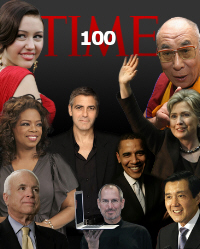 Remember back in May 2007 when Shigeru Miyamoto was voted #92 in the 2006 TIME Top 100 Most Influential People In The World? Well that wasn’t high enough according to millions of gamers worldwide…

So when TIME magazine asked who you thought should be on the list of the “Your TIME Top 100” list of Most Influential People In The World in 2008. Well, over 200 candidates (leaders, thinkers, heroes, artists, scientists and more) were given a rating of 1 to 100 and your #1 voted choice was Shigeru Miyamoto! The video game designer had almost 2 million votes, over 300,000 more than runner-up, Rain. After a tight race at the top, Stephen Colbert came in third place with close to 900,000 votes.