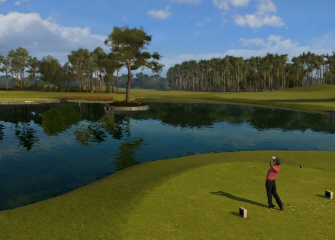 Looking to drive the ball long and straight? Trying to nail the pin with the approach shot? An all-new addition to this year’s game, Haney will assist gamers as they hit the links and try to advance their career to win the FedExCup. In Tiger Woods PGA TOUR 09, a player’s skill level is dynamic, constantly adjusting throughout the round just as it would during a real afternoon out on the links. Following each round, Haney will deliver customized feedback on a player’s performance. This feedback system allows all gamers, rookies or PGA Tour pros, to compete and enjoy the game at any level.

Online play has also been enhanced with Simultaneous Play. This all-new online engine gives up to four players the ability to play each hole at the same time, allowing players to get in a rhythm, swing when they are ready and make one round of golf even faster and more competitive than ever before possible.