The Legend of Spyro 3: Dawn of the Dragon co-op adventure announced for Xbox 360, PS3, Wii, PS2 and DS 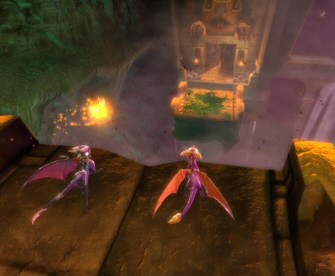 Sierra Entertainment announced The Legend of Spyro 3: Dawn of the Dragon, the third chapter in the popular Legend of Spyro trilogy. Developed by Etranges Libellules, the platform game will be released this fall for the Xbox 360, PS3, Wii, PS2 and DS. The Nintendo DS version is currently being developed by Tantalus Interactive. Vivendi Games Mobile is also making a version of the game for mobile phones throughout Europe and North America.

Reprising their roles as the characters of Spyro and his mentor Ignitus, are two popular Hollywood leading men, Elijah Wood (Frodo Baggins in The Lord of the Rings trilogy) and Gary Oldman (Sirius Black from the Harry Potter films). Joining the Spyro roster this year are Christina Ricci, Blair Underwood, Mark Hamill (yes, Luke Skywalker) and Wayne Brady, rounding out an all-star voice cast.

In the final chapter of the trilogy, players find Sypro teaming up with an unlikely ally – Cynder, his former enemy, to face his most challenging mission to date. As the Dark Master’s (voiced by Mark Hamill) evil envelopes the world like a plague, Spyro must fulfill his destiny and unlock the true power of the purple dragon within him to stop the Dark Master in his tracks.

The game introduces two never before seen elements into the Spyro universe: Spyro can now fly at any time and players can drop-in/drop-out with the new local cooperative feature. The co-op feature allows players to have the option of completing the game as either Spyro or Cynder, giving them more freedom to explore Spyro’s world in completely new ways.

Spyro’s 10 year anniversary comes with a new game containing new features and unlikely companions. Find out more about it in this video interview with, Sierra’s producer on the game, Chris Wilson.