The Alias game is a 3rd person action adventure game that promises to deliver intense hand-to-hand fighting and stealth scenarios reflective of the Alias hit TV series. Set against the backdrop of the Alias show between episodes 19 and 20 of season 2. The plot was written by the creators of the show and the game features the voices of the main cast. The game allows you to be Sydney and sends her on various missions and many different locations, while using many of the spy-skills that Sydney uses in the show.

Alias’ storyline up until the start of the game in a nutshell: (watch the show to season 2 before reading to avoid spoilers) Sydney Bristow was recruited as an undergrad to work for SD-6, which she thought was a government agency. However, when her fiancé is killed by SD-6 agents, she finds out that SD-6 is actually a counter-government agency. Sydney approaches the CIA and becomes a double agent, which means that she goes on SD-6 missions, but passes the information about her missions to her CIA handler, Vaughn.

Sydney’s father, Jack Bristow, is also an double agent. Both had a distant relationship for years, but their present situation brings them closer together. Sydney and her father spend the first season trying to foil SD-6’s missions and preventing them from getting their hands on what they are determined to get. For years SD-6 has fought against FTL and K-Directorate, two crime organizations that are also in the pursuit of various artifacts build by the 15th century scientist and prophet, Milo Rambaldi. However, when a new player referred to as “The Man” comes to town, FTL and K-Directorate are put out of business and SD-6 engages in the pursue of this new mysterious opponent.

After eliminating SD-6 and all of the other SD cells, Sydney, Marshall, Dixon, Jack, and Vaughn are now fully working for the CIA. 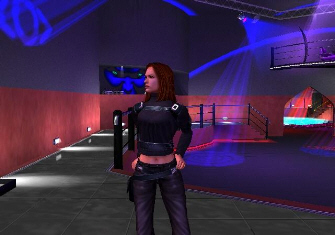 When the Alias game starts, you’re against the backdrop of the Alias show between episodes 19 (Endgame) and 20 (Countdown) of season 2.

You play as Sydney Bristow. An active field agent for the CIA specializing in infiltration and data retrieval. Young. Female. Deadly.

When CIA agent Sydney Bristow is called in to work on her day off she knows there must be something serious going down. The order has come from the CIA’s best mind – her father Jack Bristow.

The trail starts in a Monte Carlo casino, Jacobs’ last known location, but Sydney is soon in a global race against time through Saudi Arabia, Hong Kong, Rio de Janeiro and beyond.

If that wasn’t enough, it seems Anna has teamed up with both the formidable and sinister talents of Mr. Sark and Arvin Sloane but why and for what purpose? How are the “Followers of Rambaldi” involved? And what is “The Machine”?

Recruiting gamers to step into the dangerous world of international espionage and adventure, Acclaim Entertainment and Buena Vista Interactive, released Alias on the PlayStation 2, Xbox and Windows PC. Based on ABC’s hit television series, Alias is a third-person action adventure that allows players to step into the role of the series’ lead character, Sydney Bristow (played by Jennifer Garner), an agent for the CIA. Alias’ original cast will guide you through a new episode in the series with added in-game split-screen camera to tell a better story, Marshall’s cool new state-of the-art spy gadgetry and the unique combination of action and stealth interactive gameplay that puts you under fire and under pressure.

Take a look at Alias’ in-game Heads Up Display (HUD): 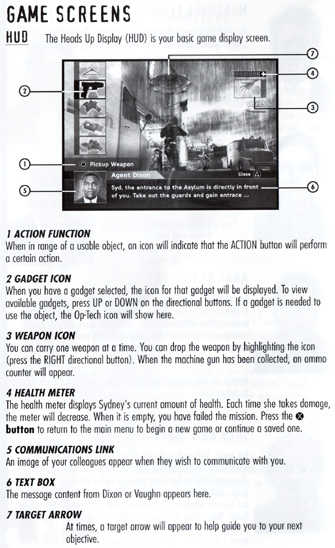 Click the image for a bigger Alias game HUD.

Whether you’re up against the clock or being hunted by the enemy, fighting against the odds, or fleeing for your life, the action is relentless. The missions become more difficult as you come closer to finishing the game. Utilize your incredible spy-ware and array of (sexy) disguises to complete the most dangerous covert missions across the globe. Experience all the heart-stopping action and tension of the Emmy award winning TV series.

As Sydney Bristow, you must use her cunning, extensive knowledge of martial arts and array of high-tech gadgetry to accomplish dangerous missions throughout nine stunning locations that span the globe. Alias encompasses all of the key elements behind the series’ success, including high-action combat, stealth missions and time-based objectives, espionage, intriguing plot twists and high-tech weaponry.

Watch the Making of the Alias game:

What are the main features of Alias?

* Levels and objectives can be completed in multiple ways.

* Intriguing, twisting plot crafted by the writers of the Alias television series.

For secret agent Sydney Bristow, life is the deadliest of games… one of infiltration, espionage and relentless stealth action. Now her missions are yours. Get armed and go deep into her dangerous world (up against the clock, under pressure and under fire) and unlock the secrets behind the TV show.

At the time the Alias game for PS2 and Xbox was released in 2004, it was the start of season 3 of the television series and the release of the season #1 DVD box set. Whereas the game was set against the backdrop of the Alias show between episodes 19 and 20 of season 2 and even introduced a new character to the TV show. Now that the Alias TV show has ended in its fifth season on May 22nd, 2006, the Alias game is a great look back at 2003’s season 2.

Alias’ conspiracy-filled drama in the world of spies and double agents is a great fit for a videogame. The gameplay walks the line between being suitable for both casuals who enjoy the show and gamers who don’t mind less than mind-blowing stealth and action scenarios. Let’s get one thing straight: If you’re new to the series, playing this Alias game will be like never having seen the show on TV or DVD and suddenly watching the heavily story-based plot unfold in a random action-heavy episode, it’ll be a fun ride… but confusing as heck! But if you’re a fan of the show — like me — then you’ll absolutely love this!

Graphics – 7.5
The wardrobe artist from the show came on-board to mainly dress Sydney’s character model for the game’s various scenarios and as expected she looks sexy in the game while kicking ass. Some of the other characters don’t quite look like their show counterparts though (I’m looking at you Michael with your creepy eyes) and the enemies are generic, but it doesn’t really matter since you’ll be playing as Sydney who’s animations and quick and smooth. Everything is well animated. Talking about smooth, the game never has any slowdown.

The environments look straight from the Alias universe. It’s visually good looking, but it’s not fully using the hardware so it won’t fool you into thinking it’s real, because the lighting could be better. You’ll be visiting diverse looking places like the Hong Kong embassy, Monte Carlo casino, Rio de Janeiro nightclub and a museum amongst others. Beautifully illustrated cutscenes are either pre-rendered CGI or use the game engine during real-time split-screen scenes, and like the show really help tell a great story.

With the voice acting done by the same actors who do the TV show, and the plot and dialog written by series creator J.J. Abrams and Breen Frazier, it’s very true to its origin. The voice acting is superb by all, except that Michael and Marshall’s lines feel a bit forced compared to the show. Michael Giacchino is the full-time composer for the ABC TV shows Alias and later Lost, He will (alongside with Alien Breed) loaned his musical talents to the game This addition strengthens the tie between the game and the series. With the soundtrack borrowing from the show’s quiet to fast-paced music, so the music is sparse but suspenseful. The sound effects are your standard fare.

Ingenuity – 7.0
Let me say this to the skeptics in the room, the gameplay won’t stop you from enjoying the story the game tells and that’s all that matters to fans of the TV show. After Sydney uses her charm to get into target buildings, you’ll find yourself sneaking around. The stealth plays out like in a Splinter Cell game where you dress in black and stay in the shadows as you hug walls, do attacks around corners and sneakily open doors. You’ll find yourself crouching and climbing around undetected to perform stealth attacks (snapping necks, etc.) on unsuspecting enemies, throwing them off roofs, and disarm guards with a counter move and then shoot them with their own guns or preferably grab a nearby blunt object and introduce it to their face for a more quiet takedown. It’s quite exciting. 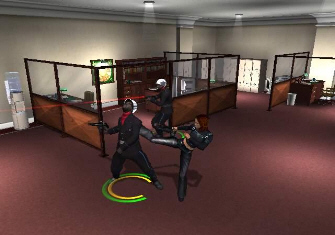 A bit too many fights occur against the same two or three generic enemies, but I suppose they all got contracted from the same evil-doer company Guards Inc. Because of this the combat itself can become a bit samey with the same moves and special attacks repeating themselves. Part of these moves includes double tapping a special attack to launch an advancing attack that gives you a greater range. An advancing attack will also break an opponent’s block. What your further attack choices are is indicated on-the-fly on the floor around you, for example when your enemy has a double arrow icon on the front of their target circle, you are in range for an advancing attack. But when they have a single arrow, you are in range for all other normal attacks.

To mix things up there are over 20 of Marshall’s gadgets in the game and they offer mini-game playtime, plus you’ll be able to switch to heat or enhanced alternative visions to scout the area to puzzle out what to do next, how to get there, talk to some people there to gain intel, and strive to complete your spy mission. Basically it’s like the show.

Replay Value – 7.0
Expect to play through the game in eight to ten hours. For Alias fans looking for a new storyline that adds an episode to the show, this game is a great addition to their DVD set collection. And if you want even more Alias storyline, I suggest you read the 12 prequel and 13 season 4 novels.

More than anything else, writing this review made me realize how much I miss having Alias around every week, but I’m really glad the series got closure in its last season all those years ago.