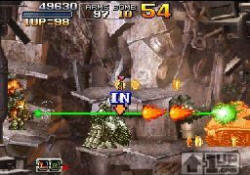 The first of the titles to be jointly published under the new partnership in America will be Metal Slug 7 for Nintendo DS. The Metal Slug series has found its home on multiple platforms since its debut in 1996, and Metal Slug 7 is the first installment to be developed exclusively for Nintendo DS without an Arcade version. The run and gun platform-shooter will be out in Japan sometime in 2008, but no release date was announced for the English version.