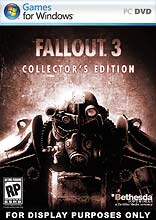 The newly announced Fallout 3 release date is October 28th in America and in Europe it’s October 31st, 2008. The Collector’s Edition of Bethesda’s RPG costs $20 more than the regular retail price, so $69.99 on PC, while the Xbox 360 and PlayStation 3 versions cost $79.99 each.

* Fallout 3: From the creators of the award-winning Oblivion comes one of the most realized game worlds ever created. Create any kind of character you want and explore the open wastes of post-apocalyptic Washington, D.C. Every minute is a fight for survival as you encounter Super Mutants, Ghouls, Raiders, and other dangers of the Wasteland. Prepare for the future.
* Vault Boy Bobblehead: Enjoy your very own Vault Boy with this collector’s item direct from Vault-Tec.
* The Art of Fallout 3: This hardcover book features nearly 100 pages of never-before seen concept art and commentary from Bethesda Game Studios artists.
* The Making of Fallout 3: Get an exclusive, inside look at Bethesda Game Studios and the team behind the game with this special DVD.
* Vault-Tec Lunch Box: The entire package comes in a fully customized metal lunchbox.