Ubisoft announced the early May release of a fully playable demo for Haze, the new first-person shooter set in a harsh future where war is never quite what it seems. Coming to the PlayStation Network, this playable demo will give gamers a taste of not only the single-player campaign in Haze, but will also allow up to four-player, drop-in drop-out co-op play online.

Screenshot of a crashed plane multiplayer scenario taken from the Haze demo: 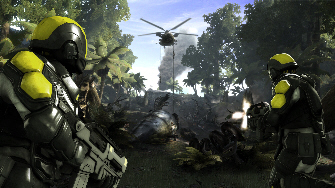 Developed by shooter experts Free Radical, creators of the critically acclaimed TimeSplitters series, Haze is scheduled for release exclusively on the PlayStation 3 in America on May 20th and in Europe on 23rd May, 2008.