Home » News » Wii News » Space Invaders Get Even on Wii! A fantastic twist on old gameplay

Space Invaders Get Even on Wii! A fantastic twist on old gameplay 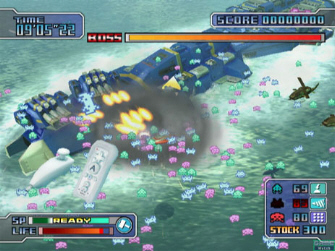 Taito Japan unveiled Space Invaders Get Even for the Nintendo Wii. In a twist on the classic arcade gameplay, this time around the Space Invaders are planning a counterattack and it’s up to you to make sure they “Get Even” with the humans that have been shooting them down for the past 30 years!

The player controls a UFO with the Wii Remote and Nunchuk, which guides 300 “Space Invaders” to execute its every command. The analogue stick on the Nunchuk attachment is used to direct the UFO, while the Wii Remote will be used to move around a total of 300 “8-BIT” Invaders. It’s unclear what abilities each set of “Space Invader” aliens will have, but the first set of screenshots at Gamewatch show different sets dispersing to swarm targets, as well as forming a large, vertical wall as you’re used to seeing them attack in.

Each stage consists out of three areas like an armored city, seaside city and jungle zone. The game is set for release in Japan sometime in 2008. — Tip via ICgamers