Sierra Entertainment announced that the Robert Ludlum’s The Bourne Conspiracy video game has a release date in America on June 3rd and in Europe on the 27th June, 2008 on Xbox 360 and the PlayStation 3. The game brings Jason Bourne’s signature combat style to life by sharply blending a seamless mix of hand-to-hand fighting, gunplay and dramatic escapes. To round out the non-stop action to the title’s hunter-prey game play, The Bourne Conspiracy will give gamers a re-imagination of the high speed pursuit through Paris in the Mini Cooper. 😀

Through close partnership with Ludlum Entertainment, and collaboration on story and character development with Bourne screenwriter Tony Gilroy, The Bourne Conspiracy is an intense interactive addition to the blockbuster films and best-selling novels. The game delivers an original story uncovering Jason Bourne’s past and the conspiracy shrouding his origins, plunging players into the role of Bourne as both trained assassin and marked government agent. Core to the experience is Bourne’s definition as a perfect weapon with heightened combat instinct, where players use Bourne’s characteristic capabilities to recognise threats, perform devastating takedown moves and use his surrounding environment to overcome deadly situations.

“Wrought with action, combat, elaborate escape scenes and untold story, the Bourne series is making a natural progression into the interactive medium,” said Al Simone, senior vice president, global marketing, Sierra Entertainment. “We’re pleased to announce that this June gamers will have the chance to experience the dangerously exciting aura and frenetic pace inherent in the Bourne franchise.” 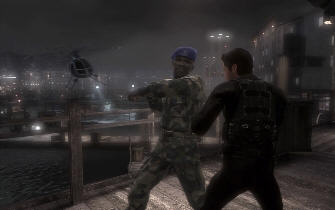 Developed by High Moon Studios and based around a combat system co-designed by Jeff Imada, the renowned choreographer who defined Bourne-style combat in the films, The Bourne Conspiracy delivers gamers every signature Jason Bourne element, from hand-to-hand fighting to shooting to escape and evasion. Framing the experience is a relentless pace of action and an in-game camera system that captures the cinematography techniques that established the memorable visual style of the films.

Capturing the intense high-speed pursuit based on the memorable car chase from The Bourne Identity, players will take the wheel in an upgraded version of Marie’s red Mini Cooper trying to evade seemingly every police car in Paris. Arcade racing-style game play and destructive stunt setups combine with Bourne instinct-based game mechanics to create a previously unseen and unforgettable action driving experience.

“We’re creating a video game that is distinctly Bourne, based on a deconstruction of the character from action hero to game hero, and one that we ultimately believe gamers will discover as a distinctively original licensed action game,” said Emmanuel Valdez, chief creative officer, High Moon Studios and game director on The Bourne Conspiracy.

Anyone can kill, but Jason Bourne brings it to a whole new level in The Bourne Conspiracy.