Home » News » PS3 News » Metal Gear Solid 5 will not be made by Hideo Kojima, who wants to create Zone of the Enders 3 or a Snatcher remake

Metal Gear Solid 5 will not be made by Hideo Kojima, who wants to create Zone of the Enders 3 or a Snatcher remake 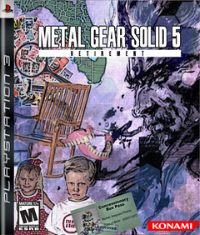 Konami’s upcoming Metal Gear Solid 4: Guns of the Patriots for the PlayStation 3 (due June 12) is the latest stealth game in a series that has been going strong for the last 20 years. In an interview with Hideo Kojima, creator of the series, he was asked if this was the last game in the series and even if he may not be making another one himself, he said he’d produce more spin-off PSP handheld games and hinted that a Metal Gear Solid 5 sequel might be a possibility without him.

Question: Obviously, the first question that’s on everyone’s mind is: Why exactly did you feel this was the right time to end the Metal Gear Solid series?

Hideo Kojima answers: I was supposed to end this in MGS2, you know, originally (laughs). And then I created MGS3, and I said, ‘Okay, this is the final one. It’s over.’ But people said, ‘No… there’s still not enough answers (in that game)!’ As a game design, the story was almost complete in MGS1, 2 and 3, or so I initially thought. But of course, there were some questions that weren’t answered, especially with some things after MGS2. I didn’t decide that this was the timing – there were a lot of voices saying, ‘We want the answer to all of the questions!’ That’s why as a game, and as a saga, MGS4 is the complete wrap up.

PR-wise, I really don’t want to say that [Metal Gear Solid 4 is] the final game or this is the wrap up, but if I don’t say it, people will make me create MGS again! (laughs) So I have to say, ‘Die, Snake,’ and really end it so I can move on to something else! (laughs) Actually, it’s a game, so even if Snake dies, the game can live on. We have to kill him at a certain point.

Question: Now there were a few things that fans of the series have easily picked up on in footage released of the game, such as Policenauts posters. Even the Mark II is reminiscent of Snatcher. I have a two part question. First, how many elements of previous games, such as Zone of the Enders or Snatcher, have helped to influence or shape game elements of MGS4? Secondly, would you return to Zone of the Enders or Snatcher possibly once you’ve put Metal Gear Solid 4 to rest?

Hideo Kojima answers: You might think that I might pass away because I’m putting everything into this past series! (laughs)

To answer your first question, none, actually – that’s just a service to the fans, the genuine fans of Kojima Productions. Policenauts and Snatcher wasn’t probably released in America and some other parts of the world outside of Japan. In Japan, there are still a lot of core fans who really love all of the series. Even Meryl – she used to appear in Policenauts – so it’s a kind of service to say thank you to the fans, actually.

Finally, it’s the end of Snake, so I’d really want to start something really fresh and new when I create the game for the next one. However, maybe the sequel to ZOE [meaning: Zone of the Enders 3], or a remake of Snatcher, for instance, if I just participate as a producer, yeah, that could be possible.

[Ocelot’s voice]
Yes.
We just finished the press conference.
Yes.
Everything went according to plan.
Yes.
We’re entering into the last phase of the mission.
Do you want to execute the launch day surprise?
Yes, that’s right.
Akihabara, New York, L.A….
Live, simultaneously throughout the world…
Yes, it’s under control.
The VIP’s are happy to participate.
Yeah, that’s right.
That person.
Yes sir, understood.
So on June 12th…
By the way, what should we do about “The Project?”
Yes, that’s correct.
That man has fallen.
It’s about the sequel.
Yes, indeed.
Yes.
Yes.
Yeah.
I see.
Yes, sir.
Mr. CEO.

UPDATE May 27th 2009: Japanese gaming magazine Famitsu had an interview with Hideo Kojima about the next MGS game. The page shows Big Boss and Raiden. Sadly the interview itself has been mostly sensored to appear mysterious and teasing. To quote:

Kojima: This time, only the image of this guy (image) will appear. Then lighting. Just this appearing, I wan everyone to guess. This is how XX’s will be appearing.
Famitsu: This…is Big Boss?
Kojima: XX’s way of appearing is slightly different.
Famitsu: Eh? Different…?

Kojima: The emblem on this guy’s hat is important.
Famitsu: The emblem isn’t a fox. There’s like a world map thing drawn.
Kojima: It’s not only an emblem, but for the game, it will be a new type of system.
Famitsu: Is it XX-XXXXXXXXXX?
Kojima: Yes. You’ll while XXXXXXX. XXXX, etc. are a given, so they’ll be included. Ooops, I’ve said more than I was planning to. (laughs)
Famitsu: Hahahahaha! Well XXXXXX, it’s XXXXXXX? Also, where’s the game going to be set?
Kojima: The place is XXXXXXX. XXXXXXXXX happened, and it’s a XXXXX type of country. There isn’t XXXXXXXX in the country, but they do have XX like things and XXXX. At that time, XXXXXX come to where the guy is.

If you want to be teased even more, try and unravel what’s going on on the official website of Kojima’s next project. I guess he changed his mind again and is making the new MGS titles MGS Online, MGS Rising and MGS Peace Walker.

UPDATE June 12th 2009: What’s interesting about that last MGS title is what he said (as the producer) in a recent issue of Famitsu, where Kojima described Metal Gear Solid: Peace Walker as, “The Metal Gear Solid 5 inside me,” which explains why he’s focusing on the upcoming PSP game!

To quote: “At first, I was just going to create the overall guidelines and concepts for the project, and leave it in the hands my excellent staff. I was going to have a hand in the project as a producer, and make titles other than MGS. But, I set the game in the South American country of Costa Rica and created a story with themes about nuclear deterrence and the cold war. It looked as if it might be very confusing to young people, because of generational differences. So, in the end I finally said, ‘I’ll do it.'”
So there you have it, not quite MGS5 by name as it is in spirit, and it might very well be the last true Kojima MGS sequel you’ll get.