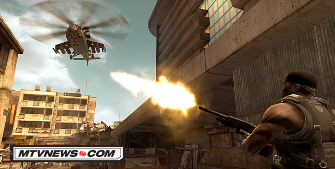 You might recall the horror all hardcore gamers experienced when rapper 50 Cent’s game sold 1 million copies back in January 2006 despite being rated by the press as a mediocre game. Well, because it sold that much to his fans, the release of a sequel was announced titled 50 Cent II: One Dollar. Ok, I made that subtitle up, but the game’s real despite this being written on April Fools Day.

I do wish it were a joke, because the “50 Cent Video Game: Blood On The Sand” game plot goes like this “50 Cent must hunt down a diamond encrusted skull in the Middle East… after his payment got lost… after a rap concert.”

50 Cent II has online play and will be released on Xbox 360 and PlayStation 3 in fall 2008. Vivendi Games producer Aaron Blean told MTV News that: “Once we get the game out there … I think people will realize right away where our focus for the sequel is. We’ve emphasized the gameplay quality [more] than anything this time around. We can’t wait to show the game around.”

“50 is going to create exclusive tracks for the game that you can only listen to in the game,” Blean said, describing the game as the “ultimate 50 Cent experience.” And he teased that more high-profile hip-hop talent may get involved too. Sounds like it’s got some fanservice then.