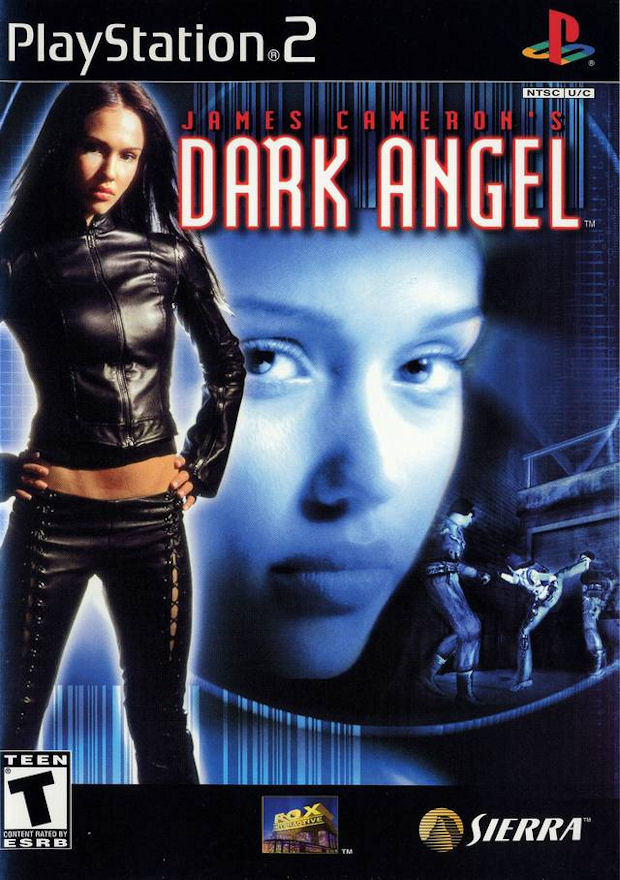 James Cameron’s Dark Angel is a 3rd person action adventure game that promises to deliver intense hand-to-hand fighting and high-octane action reflective of the hit TV series. Set against the backdrop of a post-apocalyptic Seattle, players take on the role of Max, a genetically enhanced super-soldier with attitude to spare, on a quest to reclaim her past by finding her sister and fellow genetically altered escapees. 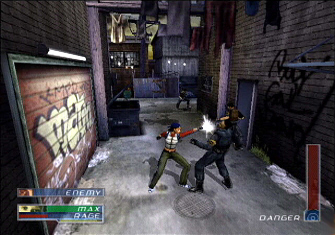 In the year 2009, the United States was hit by the Pulse — an electromagnetic shockwave unleashed by terrorists. Ten years later and still suffering from the aftermath of the Pulse, the U.S. has become a third world nation. Welcome to Seattle, this is Max’s world, a city that epitomizes what it would be like to live in the wild West.

Max is a genetically enhanced human prototype created to be the perfect soldier. As a child, after witnessing one of her siblings being shot, Max and 11 others escaped from Manticore — an organization devoted to the development of the perfect soldier at any cost. After escaping, they separated in order to avoid capture. Since then, Max has made a life for herself on the cutthroat streets of 21st-century Seattle; her obsession with locating her siblings has been her main driving force.

Max has spent the majority of her free life in search of her humanity — a way in which she can identify herself as something other than a lethal fighting machine. Her genetically altered physiology has always provided her with a combat advantage, but it continues to alienate her from the people around her. Never allowing herself to be vulnerable, Max believes that by finding her family she can overcome the battle that rages inside her. The soldier she was trained to be has always confronted the woman she wishes to become.

Max teamed up with Logan Cale, an idealistic underground cyber-journalist, to expose the corruption that is rampant in Seattle. In exchange Logan has assisted Max in locating her siblings and played a key role in helping Max destroy Manticore. In the days following the destruction of Manticore, a new and more aggressive threat has arisen. It seems that Manticore was not the only organization aggressively researching and developing genetically engineered soldiers. The – I – Corporation has emerged from the ashes of Manticore as an equally ruthless threat to humanity. They have identified Max as an excellent genetic sample and have made Max’s capture their utmost priority. The – I – Corporation also holds vital information that would further uncover secrets from Max’s past.

Logan has located several locations that have an unusually high amount of sector police and military presence. There were scattered reports of strange things happening in those sectors before they were locked down. The only relevant information leads to downtown Seattle and a facility known as Tri-Tech. Post-Pulse Seattle is a dilapidated city, controlled by the heavy hand of the sector police. Martial law type restrictions have been imposed to keep the streets “safe”. The streets are crawling with sector police on the lookout for Max, but she must safely navigate her way through the streets and alleyways of Seattle. Luckily Max has her streetwise instincts and fearless hand-to-hand combat skills that are crucial to her survival.

They designed her to be the perfect soldier…
a human weapon… then she escaped.
In a future not far from now… in a broken world…
she is haunted by her past.
She cannot run, she must fight… to discover her destiny.

What are Dark Angel’s main features?

* Original story progressed beyond the television series and features voiceovers by Jessica Alba and Michael Weatherly.

* RAGE System: Unleash over 50 fighting moves by unlocking the soldier within Max.

* Interact with familiar friends and foes from the series, plus many new characters and environments. 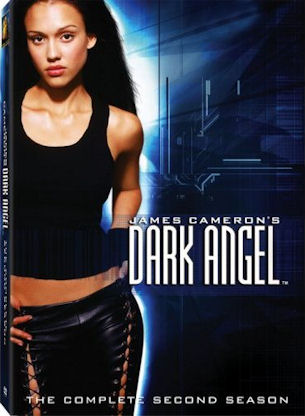 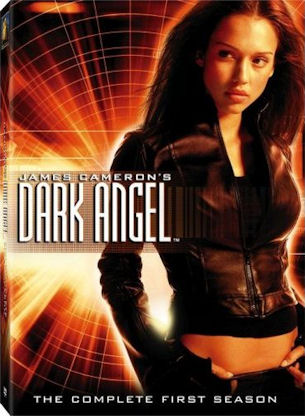 The Dark Angel game is based on the Dark Angel television show that starred the sultry Jessica Alba. Although the game was announced shortly after the game debuted at E3 2002 that the television show was canceled. Those looking for a continued Dark Angel saga can look to the game’s original storyline that has the genetically enhanced soldier Max trying to find her sister and restore her past by following others like her. There are side stories of lost siblings, destroying Manticore, and helping Logan Cale overturn corrupt government movements. And that’s the main attraction of this game. Actors Jessica Alba and Michael Weatherly, who played Max and Logan on the show, both contributed voice work for the Dark Angel game, and it includes their likenesses.

James Cameron’s Dark Angel is a third-person action adventure game with 25 single player missions that are spread out over six different environments, where players can use more than 50 hand-to-hand combat and evasive moves. Sadly the gameplay itself is uninspired and simple to control making fights a bore, not to mention the stupid enemy A.I. that acts at random. The camera angels won’t fully tilt outwards and seems to hate walls, so you’ll end up having to replay sections lots of times. This is especially bad when the stealth missions fail because you couldn’t see if an enemy spotted you from afar, because then you’re given a limited amount of time to beat all the enemies before reinforcements make you go “game over”.

Why does the game come off as rushed? You see, the shows second and final season ended on May 3rd, 2002. So when the series got a video game by the end of 2002 it really was all fans would ever be seeing from it, aside from books, to add to the Dark Angel storyline. Sadly the game’s production was scaled back considerably following the cancellation of the show. As a result the boring gameplay and samey level designs aren’t fine-tuned and you’ll need a lot of patience to play through the entire game by replaying sections over and over till you succeed. But honestly — as a big fan of the TV show myself — I have to admit that at least it’s something new for the fans to enjoy. If you’re a fan of the show too, don’t mind the low score and consider the game a must-have.

Graphics – 6.0
Most of the graphic detail and better animations were put into Max’s character model, most of the generic enemies look alike, although the Y5 class soldiers you encounter for bigger fights do spice up the look of your adversaries. Environments throughout the game mostly look like similar back alleys and are laid out in a generic manner. No doubt the lack of visual detail and design variety is the direct result of a rushed development cycle. The cutscenes are passable though.

Audio – 7.0
The voice acting from Max and Logan is done by the same actors who do the TV show, it’s very true to the series, so expect snappy one-liners. The sound effects are your standard fare. At least the soundtrack borrows from the show’s fast-paced techno beats when the action takes place, so the music is good.

Ingenuity – 5.0
After an extensive tutorial level, the game starts off with a series of levels that revolve around Max beating up an endless array of villains, usually over ten at a time. Which is the first big annoyance, the combat is repetitive and thus no challenge. The game’s villains are generally representative of either policemen or Manticore operatives, and it is testament to the game’s overall poor design that one is never quite sure which is which. Until the stealth sections start, you’ll find most of the game consists of an endless stream of violent confrontations that revolve around button-mashing Max’s melee techniques. The majority of enemies are easily dispatched with repetitive kick, punch & grapple combination moves that are incredibly easy to activate. There’s also a special mode: When Max is in Rage Mode, her attacks will cause more damage and new attack combinations will be unlocked. Max can enter into Rage Mode only if the Rage Meter is full. To activate it, hold the punch or kick button down. Once activated the Rage Meter will continue to deplete as long as Max is engaged in a fight or until the meter runs out. The speed at which Max is able to accrue rage points will be dependent on the number of fights she wins as well as by the number of combos performed. 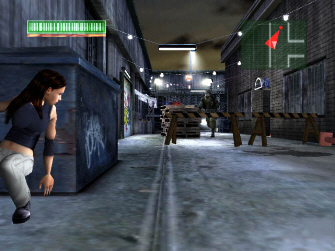 Then the second big annoyance begins when the stealth sections start about three or four levels into the game. Max must dispatch all visible enemies within a certain time period or suffer automatic capture. This results in rehashed levels where you’re often forced to repeat sections when an enemy disappears into an in-obvious element of the level and thus cannot be found within the specified time limit. Within the game you must be able to find Max’s family in a certain amount of time. Basically it’s annoying to progress in the story when you get stuck/fail every so often. So remember to save multiple savegames every once in a while, so you can go back to try and save ammo and such to beat security forces you got stuck on further on when button mashing didn’t help.

Replay Value – 5.0
There’s not much replay value once you’ve played through in under 6 hours. For Dark Angel fans looking for a new storyline that adds to the show, this game is still a great addition to their DVD set collection.

If you want to know the full Dark Angel story, I suggest you read the following Dark Angel books: Before The Dawn prequel, The Eyes Only Dossier, the Skin Game, and After The Dark. These last two books tie up the loose ends like the siege, the anti-Logan virus, the breeder cult, Ames White, and Max’s purpose.