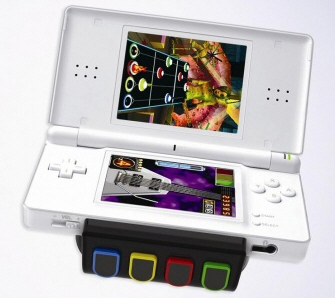 For the first time, handheld gamers will have the freedom to unleash their inner rock star anywhere, anytime with Activision’s upcoming Guitar Hero: On Tour for Nintendo DS. The music-rhythm game is scheduled for release in summer 2008. The game that’s being developed by Vicarious Visions will deliver a unique Guitar Hero experience by challenging handheld gamers to rock out and prove their shredding skills on the most diverse set list of master tracks ever offered in a Guitar Hero game, including classic rock, alternative and pop favorites such as Nirvana, OK Go and No Doubt.

The game will be packaged with a Guitar Hero Guitar Grip peripheral that fits snugly into the DS and a Guitar Hero pick-stylus that brings a new dimension to handheld gaming and the core gameplay that defines Guitar Hero. Guitar Hero: On Tour has been designed specifically for the DS platform and will offer the DS audience an all-new compelling music experience.

Guitar Hero: On Tour continues to build on the franchise’s signature easy-to-play, yet difficult to master addictive gameplay, and now lets players take their experience on the road wherever they go. Players use the Guitar Hero pick-stylus on the touch screen to strum their favorite tunes and create their rock ‘n’ roll legacy in career mode.

Fans can also join together to play co-op mode using a local wireless network, or battle each other in a Guitar Duel using new Battle Items unique to the DS platform. For example, players must blow into the microphone to extinguish a pyrotechnics effects gone wrong, or use the touch screen to autograph a crazed fan’s shirt in the middle of their set.

The first trailer is for the rock star on the go.


Featuring five unlockable new venues, the game lets players personalize their experience by choosing the color of their axe of choice, selecting to play as one of six characters – two of which are all new and exclusive to Guitar Hero: On Tour – and outfitting their guitarist in numerous styles.

“We are continuing to introduce new and exciting ways to bring music to audiences with Guitar Hero,” said Dusty Welch, head of publishing for Activision/RedOctane. “The Guitar Hero Guitar Grip redefines how games can be played on handheld systems and the integration of the microphone and touch screen gameplay on the DS, further illustrates Guitar Hero’s leadership in delivering the most unique and creative quality hardware and software on the market.”

“We’re designing Guitar Hero: On Tour from the ground up to take full advantage of the DS platform by integrating signature gameplay with fresh new content and DS specific features,” said Karthik Bala, CEO of Vicarious Visions. “We’ve taken all of our learnings on the DS platform to date and pushed it to the limits to create a truly innovative Guitar Hero experience.”