A French gaming magazine had some new articles about the two upcoming portable Kingdom Hearts games (one for the DS, another for the PSP). Most notable is that the two games won’t be released for a year or two. Stumpokapow was kind enough to translate the writings. Here are some old and some new details. 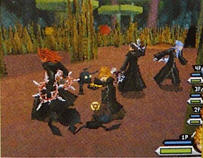 Kingdom Hearts: 358/2 Days (DS game) details:
Made by studio hand (Chocobo Tales) and co-directed by Tomohiro Hasegawa (FF8, Kingdom Hearts), Nomura obviously helms all the projects linked to the series, 358/2 Days benefits from a detailed totally 3D presentation with fluid animation. The cut-scenes do not [this is an awkward sentence even in French and it’s not an expression that I’m familiar with] blush while compared to those from KH2. Decidedly though the DS is not done shocking us… The L and R buttons let you re-orient the camera to better see the enemies and exploring the levels, which are carefully recreated from their game and movie predecessors. Explore Illusiopolis, Twilight Town, Agrabah, and Wonderland — there will be NO NEW UNIVERSES.

The DS game will have a totally new multiplayer mode where you direct the members of Organization XIII. Their missions will have variable objects, independent of the major plot, and each character will have his or her own strengths and weaknesses. The bottom screen will have a map, but a chat system could also be included. No touch controls. In the solo mode, Roxas fights the Heartless in many environments and then returns to Illusiopolis. The normal menu and combat system is recreated, including jumping, gliding, defending… Nomura promises that the customization and level-up systems will give us great freedom.

Like the other games from Kingdom Hearts, the music for 358/2 days will be written by the talented Yoko Shimomura who decidedly works often with Tetsuya Nomura — the young woman is also the composer for Final Fantasy Versus XIII. Because of the story, few new tracks will be added, so we risk hearing the Organization theme and Rxoas’ theme often… New worlds are also not in the program, and there’s a big chance we’ll hear the same Disney themes from KH1 and 2 will be re-used and re-mixed, like in Chain of Memories.

Written by Daisuke Watanabe, like the PSP version, the story of 358/2 Days takes place during Roxas’ life, from his introduction to Organization XIII to his fatal duel with Riku. These events are covered in mystery or got brief treatments, and fans demanded impatiently to know more about Roxas and his relations to Org. XIII. Also, we’ll discover what Mickey is doing and the identity of the 14th Nobody… who obviously didn’t change the name of the Organization. The game will be filled with revelations about the most important characters of the series. 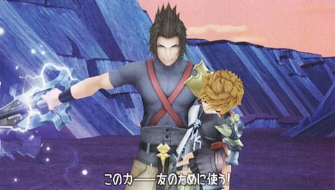 Kingdom Hearts: Birth by Sleep (PSP game) details:
Kingdom Hearts has rapidly become a major franchise for Square Enix, so it was no surprise that it would come to the two big portable consoles. The DS version will follow the short life of Roxas in 358/2 Days, while the PSP will get the right to the “prequel”, Birth by Sleep. Which — the little double-screened nomad from Nintendo or the technological beast by Sony — will get the better deal from this mix (which won’t be released for a year or two) of Disney films and Final Fantasy?

Birth by Sleep, co-directed/produced by Tai Yasue, is developed by the team that did Re: Chain of Memories. Its production started first, but it’ll be the last of the three to be completed. Technically, this “birth by sleep”, is (?)astounding, it seems as well animated as Kingdom Hearts II. The PSP installment will comprise of some Disney worlds, including Sleeping Beauty, Snow White, and Cinderella (the “Disney Princesses”[the scan says Princesses of Heart, but it’s been a while since I’ve played KH to know what the game calls them]), as well as some surprising worlds. Birth by Sleep will take place a few years before the first adventures of Sora, so some worlds will take into account the time difference; for example, we can watch teen Hercules in the Coloseum.

The gameplay will differ depending on the character you’re playing: Terra is the strongest, Ven is the fastest, while Aqua is without doubt “the specialist of sorts”. The combat menu receives a new gague, Command, which fills up when you attack and gives access to extra techniques. Terra can enter “Fatal Mode” and unleash an extra-devasting combo finisher. Another change; no more MP. Some magic has a charge time and can only be casted when it is charged. The level-up system (very mysterious) and the enemies are also changed.

Once more, Yoko Shimomura will be composing memorable music — whether uplifting or melancholy — to accompany the actions of Terra, Ven (short for “Ventus”) and Aqua. There will only be a few reused tunes; most will be edited. The main theme comes from KH II Final Mix +’s secret ending, which was called “Birth By Sleep”. Also, just like the other games, there will be a mix of newly arranged Disney classics and original compositions.

This somber and complex adventure will be divided into three chapters that you can play in any order. We will follow the journey of three characters; the fighter Terra, Roxas’ “double” Ven (this mystery will be explained!), and Aqua, a young girl with blue hair. It’ll take place before KH1 when Sora, Riku and Kairi were still kids. The main antagonist seems to be a strange old guy named Master Xehanort, and Mickey will make his own appearance: we see him protecting Ven or accompanying Yen Sid, Donald and Dingo. This chapter will lift the veil on the War of the Keyblades, the power of their possesors, and without a doubt on the origins of the amnesiac disciple of Ansem the Wise.