In the PlayStation 2-exclusive God of War 2 (AKA Divine Retribution, AKA The End Begins) you once again take the role of Kratos, a fearsome Spartan warrior. Unmatched in strategy, tactics and ferocity, after defeating Ares he’s rewarded and becomes the God of War, but in his lust for war he becomes restless and goes down to Earth to go hands-on wielding the Blades of Chaos that the player uses in the game.

Watch the sequel to the heavy-action series that put “context sensitive moves” button killing minigames on the map. God of War 2 has so far sold nearly 2 million copies worldwide. 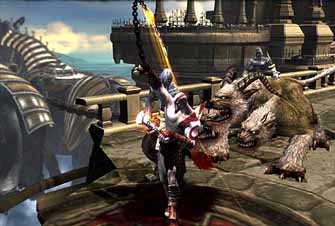 God of War saw Kratos, a mortal warrior, set upon an epic quest to dethrone a God. But his journey did not end there. In God of War II, Kratos sits atop his Olympus throne, as the new God of War – far more ruthless than Ares ever was. To end his continued torment, Kratos must journey to the far reaches of the earth and defeat untold horrors and alter that which no mortal, or god has ever changed, his fate. God of War II sets an epic stage for a devastating mythological war to end all wars.

In God of War II, players retake the role of Kratos. Armed with the deadly blades and blistering rage, players are aided by new breath-taking magic and new brutal combat moves that are acquired as the plot progresses and can be used in conjunction with the Blades to kill enemies. Defeating foes using a combination of attacks, including chaining attacks together in combos, will release red experience orbs, used to power up Kratos’ weapons and magic, and green, blue, and yellow orbs to replenish health, magic power, and the Rage of the Titans power, respectively. Chests distributed throughout the levels can also release these orbs, as well as providing Kratos with special artifacts to increase his maximum health and magic levels. The journey takes them through vividly striking environments where they are faced with a labyrinth of challenging puzzles and mini-games intricately woven into the story. The violent world of Greek mythology comes to life in gory detail as Kratos encounters new mythical characters, and compete in epic boss battles in his quest.

New features in God of War II include additional relics introduced in the game. These allow Kratos to reflect magic spells back to their target, to slow down time when near special statues, and to open locked doors. Additionally, Kratos takes flight on the back of Pegasus with the combat similar in nature to rail games such as Panzer Dragoon Orta. A new Challenge of the Titans mode allows the player to attempt 7 different challenges with increasing difficulty after they have completed the main game once. There is also an Arena of the Fates, in which the number and types of opponents can be customized. The experience points gained therein carry over to the main game. An overall rank of Titan must be achieved in the Challenge of the Titans in order to unlock the Arena of the Fates. Finally, a series of Grecian urns hidden throughout the game allow the unlocking of additional abilities when starting a New Game Plus, known in this game as a Bonus Play.

What are God of War 2’s main features?

* Huge Collection of Combat Moves: Players can utilize their favorite combo attacks from God of War along with a whole new set of moves and magic. Magic is based on nature’s elements which include utilizing the power if wind, ice and much more.

* New Characters: From the popular Cyclops and Cerebus to the Flying Gryphon and more, players will encounter some of the greatest Greek mythological beasts, along with more enemies and bosses.

* Exploration: Players will continue their previous experiences in the dark, violent world of Greek mythology and test their agility through more levels as they traverse treacherous, often brutal terrain that will range from the undiscovered Sisters of Fate to the Dark Swamp and more.

* Critically-Acclaimed Franchise: With more than a dozen “Game of the Year” awards received for its predecessor, God of War II is based upon the same foundation and comes from the same award-winning development team.

Watch some of Kratos’ special moves in this gameplay footage.

FUN FACTOR – 10
God of War 2 eclipses the original God of War in terms of quality, gameplay, and violence and excitement in its story. The best way to describe is to say that the game’s pacing is extremely well balanced. The single player game is polished to a mirror-like shine and constantly makes you feel like you’re on a rollercoaster ride. God of War 2 costs $40 new on Amazon, you have no excuse not to own this if you’re an action-adventure fan who doesn’t mind brutal, bloody killings and likes a mature storyline. A classic, a must-have! The PlayStation 2 could not have possibly asked for a better swan song. Perfect fun!

Graphics – 10
The graphics are amazing, the best the PlayStation 2 has to offer. It’s so polished that there’s no slowdown during gameplay. God of War’s story is told primarily through beautiful pre-rendered cutscenes. The art design of ancient mythical Greek environments looks fantastic and matches the story perfectly. The game’s fantastic animations make every different combo transition from move to move seamlessly; it also makes the gore more visceral, this one’s not for the faint of heart.

Audio – 10
The music is spectacular. Orchestral pieces scored by the original game’s composers and performed by the London Sessions Brass Players and the Czech National Symphony Orchestra String Players and Choir are featured alongside electronica and hard rock music, including tracks created specifically for God of War II by Junkie XL and Atlantic Records recording artist Shadows Fall. The voice acting is another strong suit, it’s convincing and always gripping. Kratos, Zeus (Corey Burton), Atlas (Michael Clarke Duncan), the story narrator (Linda Hunt’s true character identity is unveiled in this game), and Perseus (by Harry Hamlin, the original 1981 film Clash of the Titans’ voice) stand out above all.

Ingenuity – 9.5
The new weapons switching is a single button (R2) and it is fast and easy. There is no animation delay and you can switch from the Blades of Athena in mid move to The Barbarian Hammer, do a big hit, and then switch to any of the four magic’s to hit the creature some more, and if you like (and the creature is still alive) you can switch back tot he Blades of Athena to do the final kill move, all the while keeping your combo going. It makes for a more fine-tuned and perfected deep multi-hit combo system. Slight platforming and puzzling elements return and are more diverse, and kicking, puzzling and opening doors are all slightly improved as well. All in all, the action is feels epic and flows smoothly. It feels very satisfying to control Kratos as second story unfolds.

Replay Value – 8.0
Expect to play through the game in anywhere from 12 to 15 hours. After finishing the game, you’ll find the bonus modes add replay value. The Challenge of the Titans adds seven challenges (no worries, you can save after each one) and you’ll be ranked (Mortal, God or Titan) depending on how well you do. Get Titan on each challenge to unlock the most features.