Ninja Reflex uses a series of martial arts challenges to test gamers’ reflexes and measure their reaction times with millisecond precision. As players develop their ninja skills, they will strive to earn a black belt from their own personal Sensei. Players can also compete for ninja supremacy against their friends in fierce multiplayer battles with up to four players.

You know, I always wanted to be a ninja, so let’s give this a try… 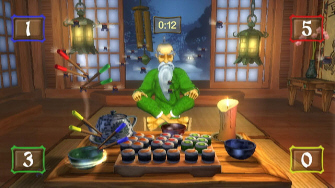 Your Sensei says: “Welcome to my dojo. You have come to learn the way of the Martial Arts. If your heart and mind are open, I will pass these lessons on to you. Here, you will learn to move like the tiger and strike like the dragon!” See if you have what it takes to become a Ninja!

“Ninja Reflex channels the accessible multiplayer fun of Wii Sports and the self-improvement aspect of Brain Age into a martial arts universe that is ideally suited for the Wii and Nintendo DS,” said David Luntz, President and CEO of co-publisher Nunchuck Games.

There are six core Ninja training exercises with several variations and difficulty levels for each game. The featured ninja games on the Wii are:

* Shuriken: Defend the courtyard from attacks on all sides with throwing stars.

* Hotaru: Test your quickness against the flash of a firefly.

* Hashi: One who can catch flies with chopsticks can accomplish anything.

* Katana: Strike down demons with your Samurai sword in a bamboo forest.

So what are Ninja Reflex’s main features?

* Develop the reflexes of a Ninja and test your skills against up to three friends.

* Choose a unique Ninja name from over 25,000 combinations.

* Calm your body, mind, and spirit with meditation lessons from your Sensei.

In conclusion let’s see how much fun Ninja Reflex is on a scale from 1 to 10?

FUN FACTOR – 7.0
Ninja Reflex aims to display martial arts in a competitive but non-violent way, which is the true purpose of the sports: inner development. At it’s core though, it’s a casual party game for families, that capitalizes on the popularity of mini-game collections that take advantage of the active Nintendo Wii Remote’s motions seen in other titles like EA Playground, WarioWare Smooth Moves, Mario Party 8, Wii Play, and Wii Sports, as well as of course making use of your own focus. A nice if somewhat shallow collection of games that combine both generic controlled (Katana, and Nunchaku) and very fun (Shuriken, and Hotaru) games. Too bad there weren’t more great games included. But the result is still a fun, but not addictive, party game that should last kids and their families a little while.

Graphics – 7.0
The visuals (graphics, animations, art) are stylish and are in line with the Japanese theme.

Audio – 7.0
There’s quite a bit of fun and cliche voice bits, but they do tend to repeat themselves. The sound effects are simple, but like the music they are inspired by Japanese instruments, which makes for a fun and a sometimes catchy oriental soundtrack.

Ingenuity – 7.5
The object of Ninja Reflex’s mini-games is to test players’ hand-eye coordination — reflexes and reaction times — and challenge friends in head-to-head competition. The active development is key as you progress through the difficulty levels of the six core ninja training exercises. The result has some fun Wii Remote controlled games that work well.

Replay Value – 6.0
The game will give hours of entertainment for all ages in a group, as a single player experience you’ll be able to play through the 11 belt ranks in about two hours. But despite the fact that multiplayer only allows you to play three out of six games simultaneous (Shuriken, Hotaru, and Hashi), the other three (Katana, Koi, and Nunchaku) are played by swapping turns, it still makes it a good party play experience if you’ve had enough of last year’s Nintendo titles. But it’s still very short. Now that I’m done with it, I’m going to give the game to my little nephews, they also liked EA Playground, so this will be a hoot for them.