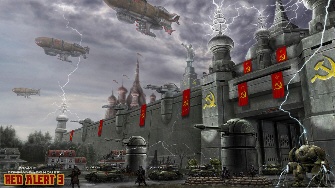 Command & Conquer: Red Alert 3 was recently announced for PC, PS3 and Xbox 360. You might’ve heard that, for the first time in the real-time strategy genre, Red Alert 3 features a co-op campaign mode and lots of cool yet wacky new weapons for each of the three factions (Soviets, Allies and Japan).

Here’s a summary of more Red Alert 3 info:
* One of the superweapons is the “Gravity Cannon that pulls satellites out of orbit and hurls them down at the enemy”, which sounds identical to Act of War’s Falling Star Uplink.
* Product Manager David Silverman (he’s been on the C&C Battlecast as well) is quoted as saying that the Japanese Empire develops in a different manner than the Allies and Soviets, and that it has its own, full, campaign.
* Tanya gets a portable time machine that allows her to move back in time a few seconds, resetting her position and health.
* The Tesla Trooper is now called the Megavolt, but can still overcharge Tesla Coils.
* Not every unit will be amphibious.
* Electronic Arts LA’s Chris Corry confirmed that the campy/corny cutscenes will return, saying: “We really do think the live-action cinematics are a staple of the Red Alert series. We’re going pretty full bore with the cinematics this time. We’re going to have more than an hour of cinematics; it’s almost a minimovie that we’re shooting for this.”
* You can take your mobile construction vehicle, you can drive it into the ocean, and you can actually build your base in the ocean. That’s right MCV’s are now amphibious units. The reason for this is for it to be the death of the early-game tank rushes.
* There will be no campaign map, just as in Red Alert 2, because the campaign is linear.
* The multiplayer code from the SAGE engine is being completely rewritten. — Partly via Planetcnc & IGN