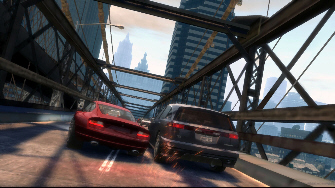 There are 15 multiplayer game modes in GTA 4. Multiplayer supports upto 16 players. PSM had an opportunity to play 7 of them and said the rules of each game are determined by the host. Your online character is fully customizable. You can alter his race, sex, hair, clothing, etc.

Here are the full details on GTA 4’s multiplayer system. But first, the game modes featured are as follows:

* In Race and GTA Race, the host gets to decide which vehicles are involved, and the number of laps to be played. You can shoot and throw molotovs from the window, and even steal your rivals’ car.
* In Deathmatch and Team Deathmatch, the host gets to decide whether the police can intervene or not. The host also gets to decide the number of pedestrians, the amount of traffic, and the type of weapons.
* In Cops n Crooks, one team play as cops and the other play as criminals. The cops must stop the criminals from escaping. They can monitor the locations of the criminals on their GPS systems, while the criminals have no idea where the cops are.
* In Mafia Work and Team Mafia Work, you play as one of Kenny Petrovic’s mafia henchmen. You must complete hits ordered by the boss (via the cellphone) before your rivals are able to do so.
* A single-player mission called “Hangman’s Noose” features co-op. You and your friends will be able to escort a mobster, while being pursused by a SWAT team.
* The map used in multiplayer is the same map that is used for single player. — Via GTA4.net