In the PlayStation 2-exclusive God of War you take the role of Kratos, a fearsome Spartan warrior. Unmatched in strategy, tactics and ferocity, after being defeated he desperately offered his life and service to Ares — the God of War — and was granted victory, from then on he wields the Blades of Chaos that the player uses in the game.

Watch the beginning of a heavy-action series that put “context sensitive moves” button executions on the map. God of War ended up selling over 3.17 million copies worldwide. 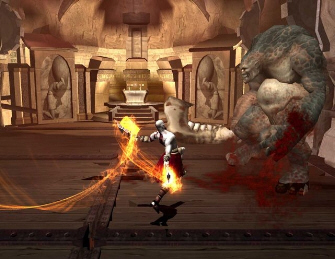 In God of War, the dark brutal world of Greek mythology comes to life before your eyes. As you take the role of Kratos, a story unfolds with various plot twists and multiple endings that take the player through explosive, aggressive gameplay fused with traps, stunts and story driven puzzles. Featuring an hour of cinematic sequences and a deep combat system built around unique double chain blade weapons, God of War will take the player through various environments that will have them fighting fierce enemies, swinging on ropes, scaling mountain cliffs, swimming through rivers and sliding down zip lines resulting in a one-of-a-kind action-packed Greek mythology adventure.

Kratos is an ex-Spartan soldier possessed by Ares, the God of War. Over time, he becomes the most vicious warrior in Ancient Greece to a point where he can’t bare it anymore and sets out on a journey to kill Ares. However, the only way to destroy Ares is to find Pandora’s Box, which is located in a temple that’s perched upon a hill and guarded by traps, puzzles, enemies, etc. The story is told as a flashback of three weeks prior to where the opening movie starts and then sets the stage for the game…

What are God of War’s main features?

* God of War introduces a brutal slice of life set in the mythological Greek era. Players can live according to their own nature. Even, if it is by brute force.

* God of War delivers an extensive combat system based on uniquely linking combos for a myriad of fighting moves. Take the combat in air, take out a number of enemies at once, and utilize “context sensitive moves” – moves that in particular situations, allow you to grab, kick or throw an enemy.

* Kratos’ main weapons are two blades – one attached to each arm by a long chain that wraps around his arm. This allows for both short-range and long-range attacks.

* Encounter some of the greatest mythological beasts and enemies: Medusa, Cyclops, Minotaur, Harpies and more.

* Unleash an innovative magic system that grants the power of gods and monsters: use Medusa’s head to freeze your enemies, strike them with Zeus’ thunderbolt, cut them down with Ares’ blades.

* Explore and unravel numerous puzzles that range from simpler lever pulls to the most mind-bending, sadistic twisters around.

* Players can experience a real-time world of interactivity: soldiers battle and die, structures fall to the ground, and the dark, violent world of Greek mythology comes to life in gory detail.

Watch some of Kratos’ special moves in this gameplay footage.

FUN FACTOR – 9.5
Similar to game series like Devil May Cry, Rygar, and Castlevania, God of War draws its inspiration from ancient Greek mythology and boasts a heavy emphasis on exploration and battle strategy. Broken into three to four acts, the game also has a strong focus on story-telling and boast tons of magic spells and abilities. God of War costs $19 new on Amazon, you have no excuse not to own this if you’re an action-adventure fan who doesn’t mind bloody killings and likes a mature storyline. A classic, a must-have!

Audio – 10
The music is spectacular, it goes from soothing when there’s no action, to an epic orchestral soundtrack when the action’s going on. The voice acting is another strong suit, it’s convincing and always gripping. Kratos and the story narrator stand out above all. Sound effects like those of the weapons and background sounds are all effectively placing you in a violent, ancient Greece.

Ingenuity – 9.5
Described as “Clash of the Titans meets Heavy Metal”, God of War equips its hero with a pair of sword-like chain weapons that can grab enemies, perform multi-hit combos, and pull off a variety of different aerial attacks. Slight platforming elements and an energy collection system similar to that of Onimusha have been incorporated as well, and players are even able to use certain elements of their fallen enemies as a weapon (re: Medusa’s head, for instance, can be used to turn enemies to stone after you’ve defeated her — shown in the video above). All in all, the action is feels epic and flows smoothly. However, a downside during fights with lots of enemies is that slowdown can occur and the platform segments aren’t always that exciting, but those are minor quips compared to the heavy action that keeps up the pace of the gameplay from beginning to end. It just feels satisfying to control Kratos as his story unfolds.

Replay Value – 8.0
Expect to play through the game in anywhere from six to 10 hours. After finishing the game a new God Mode difficulty appears to add replay and the game definitely exciting enough to warrant a replay. But most of the replay value comes from the wealth of unlockable features, anything from deleted levels, pictures of art and costumes, story backgrounds, etc.