Beautiful Katamari is the latest addition to the wacky Katamari series and it rolls onto the Xbox 360 scene with colorful high definition graphics, (online) multiplayer modes, new stages and cousins.

Roll with the Prince as he collects anything and everything he can with his Katamari in order to help right the wrongs of his father, The King of All Cosmos. Beautiful Katamari retains the quirky and fun art style of previous iterations while boasting the largest number of levels in the series to date. 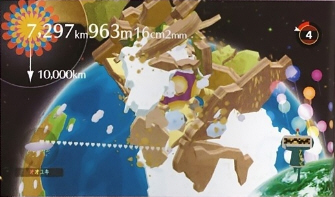 Prince takes on a new high-rolling adventure, with his famous cousins in tow, to save the Katamari universe once again after the King of All Cosmos has a very un-royal and unfortunate accident. The King of All Cosmos, his Queen, and the Prince, are enjoying some tennis while on vacation. However, a powerful serve by the King causes the tennis ball to rip through the fabric of the universe, creating a black hole that sucks everything but the planet Earth into it. In order to correct it, the King commands the Prince to roll up katamari balls on Earth with anything and everything sticking to it (the bigger the katamari, the bigger things can stick to it) until they are massive clumps that the King uses to recreate the planets, sun, and other celestial features. This is all bound by time and size limits to make things challenging and in the end set things right, bringing harmony once again to the Katamari Cosmos.

One is a lonely number, but thankfully the Prince will have more than 50 cousins to keep the ball rolling. Having discovered new games to play since the Royal Family’s last time out, players can now compete over Xbox Live with up to three friends in online challenges as the Prince or any of the cousins. But the fun doesn’t end there. Building upon the amazing Beautiful Katamari world, multiple leaderboards will track worldwide statistics and there’s even new levels as downloadable content.

So what are the main features of Beautiful Katamari?

* Rolling in 720P, 1080i and 1080P – Katamari leaps into the next generation with an upgrade into the HD era with increased visual depth and seamless Katamari growth.

* All new soundtrack – Pick up items at your leisure to a brand new catchy soundtrack that includes remixed and original Katamari-themed songs by 80s J-Pop stars.

* New levels – New levels and objects present the player with more craziness to conquer like keeping cool and collecting frosty items in an ice house.

* New characters – New cousins join the fun to bring the total to over 50 playable characters, each with their own quirky animations and style.

* Offline multiplayer – Share the experience with another player and see who can collect the most objects. Tired of battling it out? Make peace and work together in CO-OP mode to roll the same Katamari. Make sure your communication skills are working at peak efficiency!

* Online multiplayer – For the first time ever, the Katamari franchise rolls into the online world. With up to four players, compete to roll up as many specific objects as possible. As your waiting for more online players, also take part in the lively mini-games that populate the lobby and spread the world of Katamari Damacy.

Now let’s see how much fun Beautiful Katamari is on a scale from 1 to 10?

FUN FACTOR – 8.0
Beautiful Katamari lets you enjoy shiny new levels with new cousins, presents and catchy music, and gives you four different modes to chill out with, including co-op and online multiplayer. Once you’re hooked to rolling up everything in sight it’s not hard to see why fans of the series hold games like these so dear to their hearts, it’s completely wacky, mental, crazy fun. On a console filled with mature-rated action-shooters it’s a relief to have a game anyone can play for a few hours and have a smile on their face. Just sit back and relax as you roll over colorful environments that increase in size with each new katamari mission. If you’re unsure if you’d like a quirky game like this, be sure to first try out the Beautiful Katamari demo that’s on Xbox Live Marketplace. After that you should know if “fancy funnyfaces” like you will “enjoy the party tiiiiiime”.

Graphics – 7.5
This Katamari game looks Beautiful with its colorful cel-shaded graphics. All the characters and animations are cartoony and funny to watch thanks to the great simplistic design of the game world. When you get right down to it the visuals look like they came from the game’s PS2 roots despite being in “next-gen” HD, but as mentioned it’s all about the fun style which makes the game bright, colorful and thus fun to look at.

Audio – 8.5
Beautiful Katamari features a funky, fresh soundtrack that includes remixed and original Katamari-themed songs, the songs by 80’s J-Pop stars are especially catchy and will have you humming along in no-time. The sound effects are as cheerful as the in-game music and hilarious coy text; put together everything sounds really great over-the-top with Dolby Digital support.

Ingenuity – 8.0
The control scheme is the same as in the PS2 versions. The Xbox 360 game makes use of dual analogue controls for all movement. If you’re used to the PS2 controls you might have some difficulty with the Xbox 360 controls at first, as the system’s analogue triggers aren’t horizontally aligned, but players should get used to the change quickly. If you’re new to the series, you won’t have played anything this unique. The gameplay itself is easy to step into and — simply put — addictive once you get the hang of it in. A quirky concept that worked out great.

Replay Value – 6.5
Expect Beautiful Katamari’s main story mode to give you quite a few hours of playtime, but granted it’s nothing you can’t finish in an evening. You may think it’s short, but it’s oh so much fun that the game length doesn’t really matter, since you’ll be going back to each level and replay it to get a bigger katamari score and maybe find some more hidden cousins. The online multiplayer is for either co-op or up to four player matches and it can be pretty fun for a while, sadly it’s hampered by lag. A competitive edge does come with the online additions; the game tracks all your progress in the various modes and sharing this data through Xbox Live allows you to compare your performance to others, including on normal request levels, time attacks, and online play performance (tracked as “cookies” awarded by the King). A “worldwide katamari”, representing the total size of all objects rolled up by all Xbox Live players and the player’s contribution to that can be found online as well. Beautiful Katamari also received 4 new levels via Xbox Live Marketplace.