In Devil May Cry, a young man named awakes to his destiny — using his half-demon heritage to defeat an evil as old as humanity!

You’ll marvel at the engrossing stories, and your heart will stop when Dante enters the demon realm to avenge mankind. Watch the beginning of a sub-genre of action games called “extreme combat” being born with Devil May Cry that ended up selling over 4 million copies worldwide. 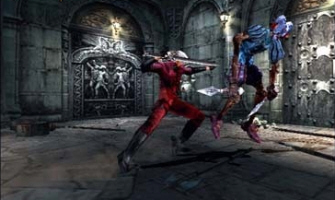 The first game in the series introduces Dante. Legend tells, in the darkest reaches of hell, of a demon swordsman named Sparda, who awoke to justice and rebelled against the devil, waging a one-man war in support of the human world. Now, 2,000 years later, a dark figure named Dante, private investigator of the supernatural, finds clues that the devil is rallying to rise up again against mankind. Who was Sparda and how does Dante fit into this gothic puzzle?

Deep within Dante’s blood lays the power of ancient demons and the key to unlock the doors to the dark realm. Follow Dante as his destiny is played out in a gothic battle of good against evil. Dante unleashes incredible powers fueled by his demon side. Utilizing a devastating mix of swords and guns, players power through a fantastic dark world. If he succeeds, the devil may cry.

Dante can shoot with guns and slash with several kinds of swords, but he’s also able to transform into a hovering nightmare that’s even more powerful. As Dante progresses through the game, he unearths numerous weapons (including his dual-pistols and shotguns), and powerful swords, each possessing various elemental powers. Among the enemies Dante fights are the low-class Demonic (which normally are slow but fight surprisingly fast), the grim-reaper like Death, which hover in air and travel through walls, and attack with scissors-like weapons and scythes, and the high-level castle rulers, the Phantoms.

The gameplay consists of levels called “missions”, where players must fight numerous enemies, perform platforming tasks, and occasionally solve puzzles to progress through the story. The player’s performance in each mission is given a letter grade of A, B, C, or D, with an additional top grade of S. Grades are based on the time taken to complete the mission, the amount of “red orbs” gathered (the in-game currency obtained from defeated enemies), how “stylish” their combat was, item usage, and damage taken.

“Stylish” combat is defined as performing an unbroken series of attacks while avoiding damage, with player performance tracked by an on-screen gauge. The more hits the player makes, the higher the gauge rises. The gauge starts at “Dull”; progresses through “Cool”, “Bravo”, and “Awesome”; and peaks at “Stylish”. The gauge terms are similar to the grades you get at the end of the missions. When the character receives damage, the style rating resets back to “Dull”. Players can also maintain their style grade by taunting enemies at close range. These combat mechanics are used for most of the game, with three areas that are exceptions. The first is an underwater first-person shooter area, where the player battles enemies with a needle gun. Secondly, during the final boss battle, the gameplay switches to a rail shooter-type environment, and finally a similar rail-shooter level is used for the character’s escape from the island by airplane.

The player can temporarily transform the character into a more powerful demonic creature by using the “Devil Trigger” ability. Doing so adds powers based on the current weapon and changes the character’s appearance. The transformations typically increase strength and defense, slowly restore health, and grant special attacks. It is governed by the Devil Trigger gauge, which depletes as the ability is used, and is refilled by attacking enemies or taunting in normal form.

Devil May Cry contains puzzles and other challenges besides regular combat. The main storyline often requires the player to find key items to advance, in a manner similar to puzzles in the Resident Evil games, as well as optional platforming and exploration tasks to find hidden caches of “orbs”. Side quests, called “Secret Missions” in the game, are located in hidden or out-of-the-way areas and are not required for completion, but provide permanent power-ups. They typically challenge the player to defeat a group of enemies in a specific manner or within a time limit. Rewards for all optional puzzles and challenges come in different types of “orbs” which give bonuses such as allowing the player to purchase power-ups, extend the Devil Trigger ability, or boost total health. 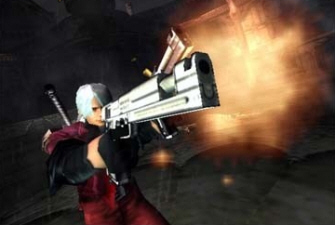 What are Devil May Cry’s main features?

* Play out the destiny of Dante, a private investigator of the supernatural who has the power of ancient demons within his blood

* A terrifying gothic thriller from the creator’s of Resident Evil 2.

* Battle a host of monsters and build up power to transform into a demon state, to inflict devastating attacks on enemies.

FUN FACTOR – 9.5
Devil May Cry is a game with attitude, Dante’s the perfect anti-hero who kicks some serious demon ass as he exercises his fast-paced wit, swordsmanship and gunplay. The endresult is a PlayStation 2-exclusive frantic action-heavy game that’s great for easy pick up and play and it always feels satisfying doing so. A classic, a must-have!

Graphics – 8.0
After Capcom showed the world what they could pull of graphically with Resident Evil. Now with Devil May Cry, the story is told primarily through a mixture of cool cutscenes, which use the game’s engine and several pre-rendered full motion videos. The medieval art design of the environments looks fantastic and are fittingly gothic. Although it has to be said some graphics show jaggies. The in-game animations, especially on Dante, transition smoothly. The reason why it’s so impressive all these visual feats come together in a perfect mix, is because everything comes at you at such a rapid speed and the game never misses a beat.

Audio – 8.0
What little voice acting there is, is strong, convincing and always badass. Dante is THE man. The game’s soundtrack kicks into overdrive when there’s lots of action starting on-screen and the overall music is heavy rock with guitar-heavy riffs. Sound effects like those of the weapons are your standard fare, but effective.

Ingenuity – 9.5
As Dante you’ll be handling both swords and guns that feel very satisfying to handle thanks to their swift responsive controls. In the first half of the game, players slash and shoot their way through. After acquiring a different weapon, the focus changes to close combat. Weapons can be upgraded and new attacks can be learned, adding to the game’s depth. All in all, the action is immense and flows smoothly. However, a downside during fights with bosses and multiple enemies is that the fixed camera angles can get frustratingly in the way, but that’s a minor quip compared to the extreme combat that keeps up the pace of the gameplay from beginning to end. Devil May Cry just feels right.

Replay Value – 7.5
Depending on the difficulty level you choose, expect to play through the game in anywhere from six to 15 hours. Aside from these increased difficulty levels there’s not much replay value, but you’ll still enjoy every minute of it.