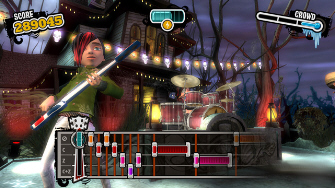 Disney’s latest music game is Ultimate Band, which they announced for Wii and DS. In the game you’ll be playing along to licensed tracks with the Wii remotes and nunchuks (or the stylus on the DS version). The release date is expected sometime this holiday season.

It certainly looks like a Guitar Hero and Rock Band copycat, but apparently that’s not true. To quote the developer: “Aside from the peripheral, we’ve always considered those to be more of a sim versus a game,” says Fall Line Studios senior producer Tim Huntsman. “Our focus has always been on, ‘Let’s make a game. Let’s focus on the fun and the physicality of what it’s like to try to play air guitar.’”

Here are Ultimate Band’s features lined up:
* No peripherals, all instruments in the Wii version are played via Wiimote and Nunchuk.
* Not Disney music, licensed music: Devo’s “Whip It”, The Raconteurs’ “Steady as She Goes.” and many more.
* Guitar: strum with Wiimote while pressing button combos on the Nunchuk. Slide Nunchuk to simulate sliding your hand up/down the neck of a guitar.
* Bass: strum with Wiimote while pressing button combos on Nunchuk.
* Drums: Wiimote/Nunchuk used like drumsticks to tap out beat.
* ‘Trick system’ that has players hitting drum fills up to a certain number.
* Local multiplayer, but ‘no comment’ on online.
* DS version will not feature licensed music. It will play out more like the jam session in Hannah Montana: Music Jam. — From Gameinformer, via Neogaf