Patapon is a PSP-exclusive highly stylized, 2D platform/action adventure game that transforms players into a mystical leader in charge of guiding a tribe of small, quirky warriors called Patapons.

Through an innovative use of musical beats, players will march the Patapons against opposing armies and gigantic monsters in an attempt to find the far end of the world. 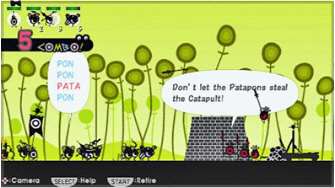 For years the Patapon tribe has lived in the desolate frontier, driven from their home by the evil Zigoton army. Behind the Patapons’ cute exterior, lies a fierce warrior spirit that can only be commanded by the beat of their God’s war drum. They wait for the day that the “Almighty” will return, to lead them against their enemies and to bring them back to their homeland, as well as help them to reach the far end of the world in search of the mysterious “IT”. Finally, their wait has come to an end as the drums of war are heard once again.

In Patapon, players will encounter a new style of gameplay that blends rhythm and action, where various drumbeats are used to command the Patapons to march, retreat, attack, and defend, all in the ultimate quest for survival and victory. The game presents a variety of warrior types, along with a wide selection of weapons and shield upgrades, allowing each player to customize their Patapon army and strategize for each mission. Using character designs by popular French graphic artist Rolito, who served as chief artist for the game, Patapon introduces a distinctive art style incorporating abstract shapes, vibrant environments, and larger-than-life boss enemies. 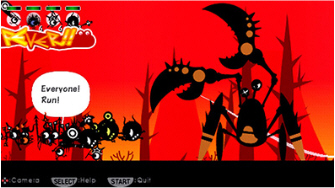 Set among a variety of colorful 2D backgrounds, Patapon unfolds through more than 30 missions with more than 20 different environments, where players are tasked with outfitting the Patapon army, collecting resources, and using strategy to grow the tribe into a devastating fighting force.

Incorporating various button-timed drumbeats in real-time to control the Patapons, players will strategically traverse through each environment, battling enemies each step of the way. The game presents a variety of warrior types such as archers, infantry, cavalry, and more that players can unlock, along with a wide selection of more than 100 weapon and shield upgrades, allowing players to customize their forces throughout the funky adventure. Additionally, Patapon features five unique music-based mini-games to earn additional Patapon upgrades. The game has a very addictive nature, as you collect rare weapons and items, and earn more points to upgrade and amass an army of Patapons.

So what are the main features of Patapon?

Rhythm and Action Collide –- Master up to six different drumbeats to command the Patapon troops to march, attack, defend, power up, retreat, and use magic. Combine the various chains of drumbeats to address each unique level, leading the Patapons to victory over the Zigoton enemy forces.

Strategic Gaming –- Patapon delivers a strong element of strategy by requiring players to properly customize and build up the Patapon army, arm each soldier with particular weapons and armor, and position them correctly for battle.

Mission Variety –- Take part in more than 30 specific missions including hunting, escort, and boss battles, and explore numerous vivid environments along the way. Players will discover and access more than 100 items and weapons throughout the adventure.

Watch how the Patapon beat the red dragon boss.

FUN FACTOR – 9.5
Patapon features a unique art style, infectious musical beats, and a unique control system where you’ll give real-time strategic commands to the Patapon troops through a variety of rhythm-based combinations. Don’t be fooled by its colorful design and simple looking drum controls, as the game progresses you’ll quickly find yourself learning to manage the customizable warriors tribe consisting of infantry, ranged troops and cavalry. These light-RPG elements of status and level upgrades in the game let you weapon-upgrade your Patapon with the spoils of war from defeated Zigotons and monsters, or alternatively use Ka-Ching money to buy more troops and bring back killed troops via the Tree of Life.

$20 for such an original, action-filled and addictive game makes this a no-brainer for PSP owners who enjoy their occasional quirky game. Try out the Patapon demo if you don’t believe me. It’s a lot of fun and comes highly recommended! You might soon find yourself humming “Pata Pata Pata Pon! Pon Pon Pata Pon! Chaka Chaka Pata Pon! Pata Pata Pata Pon!”

Graphics – 9.5
French graphic artist Rolito’s character and environment designs come together to great effect in a very unique abstract art style. The cartoony visuals make sure the smooth animations display a wide variety of emotions in your Patapons, it helps make the characters lovable. The levels are polished with vibrant colors and filled with bizarre creatures. It will likely put a smile on your face, it’s literally a joy to look upon.

Audio – 9.5
Granted, the soundtrack doesn’t present you with lavish orchestras, but the simple tunes incorporated into the gameplay are catchy as heck. You’ll be humming the tunes long after you’re finished playing. It’s fantastic… unless you hate this kind of music, LocoRoco has similar happy tunes that you’ll either love or hate. The Patapon’s shouts are accompanied by text that makes them both funny and endearing. As you can probably tell, for a game that’s mainly music-rhythm-based, the tunes do a great job of raising your enthusiasm to a fever pitch as your army sings along.

Ingenuity – 9.0
Your Patapon warriors army, consisting of infantry, ranged troops and cavalry, is commanded by beating rhythm combos on four different talking drums each mapped to one of the PSP’s four control buttons. Thus the gameplay is controlled very smoothly as you get into the rhythm. Different combos tell your army of Patapons to do various things such as advance, attack, and defend. Keeping the rhythm going and not missing a beat builds a frenzy in your army which increases attack speed, power and general prowess.

The game and story is unfolded through a number of missions of increasing difficulty. As you progress, new opponents are introduced and more drum rhythms are unlocked. Between missions, new troops can be spawned by spending currency called Ka-Ching and combining various resource items. Throughout the game you can also edit troop formations and acquire new weapons to equip their Patapon. This adds strategy and makes the game quite customizable in a light, fun way.

Replay Value – 7.5
Expect the game to last you about 10 to 15 hours as the levels get progressively harder and you’ll find yourself backtracking to get better items, weapons and songs. It’s perfect for both a quick play during a break and for longer hauls during your downtime. While there’s no multiplayer, you can replay the boss levels (sadly not the funner in-between levels) and unlock more of the creative mini-games by collecting the spirits of fallen Patapons. Or you can always start over again, although you’ll likely finish twice as fast a second time.

PS: There’s a special Patapon demo-only weapon, The Spear of Protection, that can be transferred once you finish the demo and start playing the retail version. Don’t worry it’s transferred automatically thanks to demo-to-final save technology.