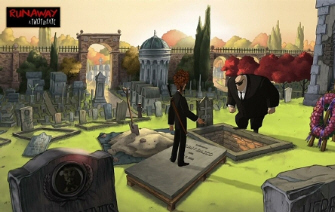 Pendulo Studios has revealed the first details of the 3rd installment in the Runaway point-and-click adventure franchise, titled Runaway: A Twist of Fate. The game will be released sometime in Q1 2009.

At the Game Developers Conference 2008 last week, the Italian developer showed the first art pieces (shown above). They mentioned that Runaway 3: A Twist of Fate will have “a much somber mood and darker setting than previous titles in the series”. — Via Worthplaying