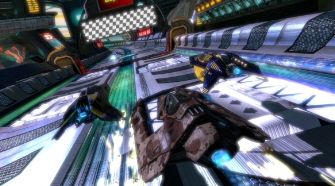 1. Vineta K – On the southern shores of Makana Island, the circuit at Vineta K snakes in and out of the ocean and across the beaches. The highlights of this 4.4km track include spectacular underwater tunnels and cutting-edge architecture along the waterfront.

2. Chenghou Project –The feature-packed circuit at Chenghou Project weaves its way around the offices and corporate buildings of Makana Island’s business district. The 4.8 km track contains a tricky inverse-cambered spiral and culminates in a long jump into the tunnelled entry of the final chicane.

3. Sebenco Climb – The 4.8 km Sebenco Climb track is cut into the hillsides of Makana’s Sebenco mountain range. It features a steep traverse up the snowy mountainside, followed by a breathtaking plunge into an icy tunnel carved through the very heart of the mountain. The final section takes pilots through a challengingly tight chicane before they swing back onto the grid.

4. Sol 2 – The 4.4 km Sol 2 circuit hangs suspended in the clouds high above Makana Island. Consisting of a series of fast-flowing, occasionally open-sided corners linked by sweeping straights, the combination of harsh sunlight and blind summits ensure that Sol 2 is a test of nerve for every speed class.

5. Ubermall – In the heart of Makana Island’s commercial zone is Ubermall, a 4.6 km circuit built into a vast shopping centre. The latter half of the track contains a brief split which rejoins into a narrow hill, followed by an outdoor park section that leads swiftly to the finish.

6. Anulpha Pass – The 5 km Anulpha Pass track is located in a custom-built entertainment arena on the east side of Makana Island. Although the track looks deceptively simple from above, the undulations of the track surface and narrow skill-cut are enough to keep any racer on their toes.

7. Moa Therma – The immense man-made complex of Moa Therma is located just off the northern coast of Sicily, with around a third of the track surface built using mag-strip technology. The centrepiece of this 5.3 km circuit is the gigantic horizontal loop which sits just above sea level.

8. Metropia – The 4.7 km Metropia circuit weaves its way between the skyscrapers and traffic control towers that dominate the Kyoto skyline. Glass-bottomed track surfaces and a stunning vertical mag-strip drop into the depths of the city are just two of the highlights of this popular track.