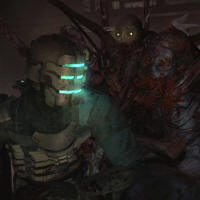 Electronic Arts today announced that their upcoming sci-fi survival horror third-person shooter game Dead Space will be in North American and European stores on October 31st for the Xbox 360 and PlayStation 3. That’s right, you’ll have something scary to play on All Hallows’ Eve!

UPDATE: “Get Your Halloween Treat Earlier This Year! Originally scheduled to ship on October 21st, the award-winning action/adventure game, Dead Space will ship early for the Xbox 360 and PlayStation 3 on October 14, 2008 giving players a full 17 days before Halloween to step out into space for the fright of their lives. The development team at EA Redwood Shores is getting into the Halloween spirit early this year so fans can celebrate with Dead Space without cutting into their trick or treat time.”

“Survival horror is about experiencing a terrifying, and deeply personal fiction,” said Executive Producer Glen Schofield. “Dead Space is being developed as a single-player thriller that delivers the chilling, claustrophobic feeling of being isolated in a dark environment, while being stalked by some truly horrific enemies. Halloween is the perfect time for EA to deliver the fear and anxiety that will keep survival horror fans up playing all night.”