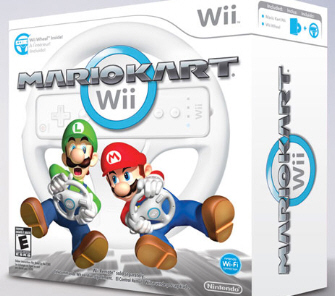 Mario Kart Wii has a European release date on 11 April! And in America it’s April 27! That’s one day after the Japanese April 10th launch of Nintendo’s racing game. Pricing is expected to be around £40 / €50 or $50. Mario Kart’s Wii debut will support five different control options: Wii Wheel, Wii Remote turned on its side, Wii Remote and Nunchuk combination, Classic Controller and even Nintendo GameCube controller. 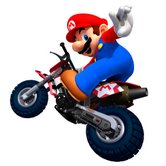 Impressive new racing options include:
Mario Kart Wii will boast 16 new tracks and 16 classic tracks, new characters (like Koopa Troopa and the option to race as your Mii), weapons (Mega Mushroom from New Super Mario Bros. turns karts into giants, the POW block from Mario Bros. stuns other racers with shockwaves, and a Lightening Cloud item gives you temporary super speed), and vehicles (bikes that are more maneuverable than the karts, but can more easily be bumped around).

In the single player Grand Prix mode, 50CC is comprised of kart-only races, 100CC is bikes-only, and 150CC lets both lose together. More traditional multiplayer modes also return, with a raft of options available for up to four players. There’s also a Wi-Fi mode allowing 12 players to race simultaneously and you can even use two-player local split-screen in combination with online play. The title will launch alongside the Mario Kart Channel.

Snaking it OUT in Mario Kart Wii, the boost power builds automatically during a successful powerslide, and the longer you hold it the more boost you’ll get out of it. As soon as you let go of the powerslide trigger (the button on the back of the steering wheel controller) your kart will jolt forward with a surge of energy. No more waggling the stick/control pad back and forth to generate boosts this time around.