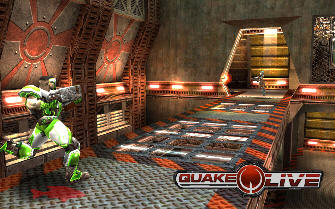 At the Game Developer Conference advertising network IGA announced that it has partnered with id Software to manage all advertising for the upcoming Quake Live website and free-to-play browser version of the popular 1999 Quake III Arena multiplayer action-FPS game. You can sign up for the Beta on the website.

Created by id Software as an all-new way to deliver the excitement and energy of first-person multiplayer action to a broader audience than ever before, Quake Live (previously known as Quake Zero) offers game players of all skill levels a totally free and easily accessible multiplayer game and community. Every element of the experience, including friends lists and communication, sponsored events and tournaments, matchmaking, stats tracking, and even the game itself is accessed and delivered free of charge through the web browser. No release date was announced. But now that the browser plans are out, how about the already confirmed Xbox 360 version or a possible DS version of Quake III Arena that id Software co-founder and programmer John Carmack talked about last year?

IGA predicts more progressive game publishers like id Software will create what the company has coined “freemium,” or free-to-play premium games based on their most popular titles in order to attract new audiences and open new revenue advertising revenue streams. A recent eMarketer forecast estimated the current video game advertising market to exceed $502MM and is expected to grow 23%year-over-year over the next five years.