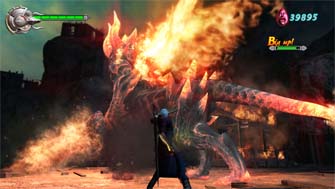 Capcom announced that its multi-platform title Devil May Cry 4 has shipped over two million copies worldwide. Devil May Cry 4 is currently available for PlayStation 3 and Xbox 360. The game was only released in the U.S. and Europe earlier this month and in Japan in January, making this fastest-selling installment in the seven-year-old series. The entire series has shipped more than 9 million units worldwide (as of February 20th, 2008), and has become a banner franchise for Capcom.

Remember that we’re running a Devil May Cry 4 competition right now, where 2 lucky gamers will win Devil May Cry 4 for Xbox 360 or PS3! You have until March 12th to enter for a chance to win the game.

* From the producer of the original Devil May Cry and Resident Evil 4.
* 2 playable characters – take control of both Nero & Dante.
* High-definition 720p visuals moving at 60 frames per second.
* Blend of familiar and new: newcomer Nero clashes with veteran Dante plus appearances from Trish, Lady and others from the DMC series.
* Exceed System allows Nero to easily charge up his sword with a throttle effect, revving up to three levels with powerful and varied attack options.
* Deep combo system rewards stylish dispatching of enemies.
* Unique “Devil Bringer” arm opens up a range of never seen before combo options.
* Distinct set of weaponry and moves for Nero and Dante.
* New active style change system for Dante allows him to switch styles and weapons on the fly, producing crazy combo possibilities.
* Numerous new characters and environments.
* Signature blend of guns and swordplay.