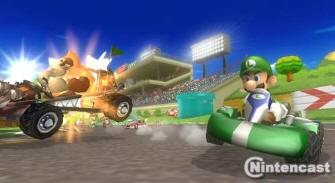 Mario Kart Wii is fast approaching with a release date set for second quarter 2008 and new details on the game will keep slowly trickling in as the final date approaches.

Here is some new information on the game along with some brand new screenshots!

* D.K’s snowboard Cross is a half pipe sort of track. You’ll be able to drive up the side of them and pull off awesome tricks in the air.
* Miis will be spectators in the background.
* Luigi’s circuit is still a simple track.
* Koopa Troopa will be a playable character.
* Coconuts Mall has players driving around a huge mall with multiple routes.
* D.K has a new go-kart.
* Names hover over players during online play.
* Motor bike will be able to be used online.

Finally, numerous retailers are now reporting that the game will launch in Europe on April 25th, which is just 15 days after its ‘confirmed’ launch in Japan.