Paradise City gives players license to wreak havoc in Burnout Paradise (AKA Burnout 5), the ultimate racing battleground, with a massive infrastructure of traffic-heavy roads to abuse. Gone is the need to jump in and out of menus and aimlessly search for fun like many open world games; in Burnout Paradise, every inch of the world is built to deliver heart-stopping Burnout-style gameplay. Every intersection is a potential crash junction and every alleyway is an opportunity to rack up moving violations.

Feel the adrenaline course through your veins as you take to the road for the first time in Paradise City, where the action is all around you. Explore the city, discover events, and look for the best opportunities to crash, jump and pull signature takedowns. In Burnout Paradise you’re given the keys to the city, but it’s up to you to earn the keys to the meanest and most dangerous cars on the street, and earn your Burnout license. 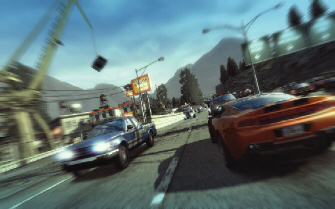 Welcome to Paradise City! Make action your middle name, as you control what happens when and where in Burnout Paradise! Immerse yourself in the open roads of Paradise City from the downtown streets through the hectic freeways to the sweeping mountain roads; the world is waiting to be explored.

Slam, Shunt and Wreck opponents in cross-town race events, where YOU decide the fastest route to the finish line. Hit the jumps and find shortcuts, smash through barriers and get to the places that other racers can’t reach to get that competitive edge!

The various event types you’ll come across are:

* Race: Races consist of the player and at least 1 other car. The player is given a location to race to. The player can take any route through the city to the location with the aid of a flashing road names at the top of the screen when the player is advised to turn. First one to arrive wins. This is the only available mode online. Online races can also include checkpoints that need to be crossed before reaching the finish.

* Road Rage: The player is given a target number of takedowns and a timelimit. A Road Rage event is won by meeting or exceeding this target in the given timelimit.

* Marked Man: In this event, the player is given a destination. At least 1 opponent is trying to stop the player from reaching the destination by scoring takedowns against them. The player must survive from start to finish in order to win (the player can crash/be taken out, but loses the event if he totals the car).

* Stunt Run: Players are given a target score. They must earn points towards that score by using boosts, jumps, drifts and other such stunt moves.

* Burning Route: Each Burning Route requires the player to use a specific car. Once the player is driving the required car, they race against the clock to a specified location. When a Burning Route is won the player wins an upgraded version of the vehicle they completed it with. The upgraded vehicle can boast extra boost power, more base speed or a stronger body (but usually in exchange for another category). This is the only kind of event that doesn’t reset when the player earns a new license because its tied to the car used to run it rather than the license level the player is presently at.

But exploring the city and doing events doesn’t have to be a single player affair. You can meet your friends online with the EasyDrive system that smashes through the tedium of lobbies and servers and cuts straight to the chase by inviting friends or other people to where you’re driving. Burnout Paradise provides a driving playground for you and your friends to play online on the Xbox 360 (and PlayStation 3).

So what are the main features of Paradise City?

* Explore Paradise – From big-surf beach, to downtown gridlock, there’s over 30 square kilometers (400 kilometers of open road) of the ultimate driving playground to explore from the get-go. Nothing is blocked off.

* Burnout Your Way – Just pull up to over 120 stoplights and spin your wheels (hit the gas and brake at the same time) to start one of five different events – the classic Race, Road Rage and Burning Route, and the all-new Stunt Run and Marked Man games.

* Instant Online – Burnout Paradise sets the new standard in online social gameplay. See your friends online with the EasyDrive Friends List and connect with them instantly (hit right on the D-Pad and choose who to play with and what events to do) without having to wait or exit your game.

* Team up or Takedown – Join forces with up to seven of your buddies to beat hundreds of online FreeBurn Challenges together or heat up the competition and go head-to-head in user created race routes.

* Road Rules – Make and break the rules of each road by setting speed and destruction records all over town. Track how many you own against your friends!

* Mugshots – Track the length and breadth of up to 2,500 online rivalries. In your moments of victory, grab mugshots of opponents who have connected their Xbox Live Vision, PlayStation Eye, PlayStation 2 EyeToy or other compatible (web) cameras. When a player is taken down, both players will have their photos taken and exchanged. Save these photos on your hard drive and gloat over them even more in your trophy room or export them for ultimate bragging rights!

* Showtime: Crash Anywhere, Any Time – Feel like bringing chaos to the streets of Paradise? Press the two shoulder buttons and slide your car out sideways and make it start flipping. This sets your car wrecking, spinning and scraping down the road, smashing through traffic and leaving a trail of expensive wreckage in your wake.

* Cars – Muscle cars, exotics, hot rods and even supercharged SUVs, engineered to look beautiful whether they’re brand new or mashed into scrap. Choose from stunt, speed or aggression car classes, each built with their own unique boost ability to give you the upper hand for specific challenges. Shut down roaming rivals and rack up wins on your licence to strut the streets in a wide selection of unique rides.

Strap yourself in and get ready to own the streets! Watch some Paradise City gameplay footage.

Cruise around the vast city streets in Burnout’s first entry as a free-roaming racer.

Now let’s see how much fun Paradise City is on a scale from 1 to 10?

FUN FACTOR – 9.5
Looking back on the long-running Burnout series you’ll see each game has been a slight improvement upon the last similar game, just more tweaked and with better graphics. Developer Criterion went beyond that in Burnout Paradise and has created the best game in the series by making it an open world game. Want a new car? Drive through the Junkyard. Refill your Burnout meter? Drive through a gas station. Repair your car? I think I see a repair shop over there, the same is true for getting a new paint job, it’s all automatic by driving through it. That said, you’ll start out a little confused as the radio DJ Atomika explains the concepts of the game and how you can activate race events in the city, as well as Showtime mode which replaces Crash mode but makes it better and bigger by letting you activate it anywhere and anytime! And that last bit right there is where the power of this racing game without a story lies, you can do whatever you please or choose to gain new licenses. Your drivers license also keeps track of your records on every street, like fastest time and biggest jump or crash, which of course results in a spectacular slow-motion effect.

If you feel driving one of the 75 obtainable cars by the 120 events gets to be a bit lonely, you press a button and seamlessly go online with up to eight other players after selecting who to drive with and what to do, after which you get 50 more challenges for each number of players (so 350 challenges total). This instant “no menus” and “no loading” ease-of-use is a fantastic innovation on top of the open world concept (that might remind you of Grand Theft Auto games). A downside to this huge city is that after you start a race and stop, fail or finish it; it’s hard to find the beginning again to restart as you’ll have to find your way back, since you end up where you end up. The same is true for finding the finishing line, since I often found myself pausing the race by going to the map screen to find my bearings again. So navigation could use some improvement, which is a shame, but luckily most of the game is completely engrossing as you crash and cruise around. Even the A.I. is tough as nails and doesn’t hold back! You’re getting great graphics, a fantastic selection of music to play as your drive and it all helps enhance the experience of speed the game gives. With closed circuit tracks gone, you’re free to roam the city streets and find shortcuts, billboards, stunt ramps or try the various fun challenges and events. For anyone even remotely into racing games, Burnout Paradise is an amazing spectacular game to play, highly recommended!

Graphics – 9.0
Good graphics. Despite the huge open world, the game still runs at 60 frames per second, it never slows down which is quite an accomplishment. However, compromises such as the lack of day and night cycles and weather conditions have been made. But since it’s an arcade racer and not a simulator, these graphical effects aren’t missed when there’s so much else to be seen, especially the sense of speed, slow-motion crash effects, and car damage models are fantastic.

Audio – 9.0
Every sound effect to do with the cars, from the engine roars to crashes sound suitably impressive and really “drive” the game forward. The Burnout Paradise soundtrack is very diverse (including LCD Soundsystem’s Us V. Them and N.E.R.D’s Rockstar Remix) and usually helps to get that adrenaline pumping during racing events. Of course there’s the very fitting 1987 song “Paradise City” performed by Guns N’ Roses that greets you at the start menu and in-game. Stop driving for a few seconds and you’ll be taken to the fantastic additional Picture City mode where the streets fly by in black and white as classical music plays from the likes of Mozart and Verdi.

Ingenuity – 8.5
The controls feel perfect, they are finely tuned without overdoing it (it’s still an arcade racer) and respond naturally to your every move. You can’t beat the sense of speed Burnout Paradise gives you, which is mainly thanks to how well the cars handle. Navigating the city is hampered by races not restarting you where you left off (backtracking) and having to rely on the map too often to find your way. As for the rest of the gameplay, without in-game menus the way you enter events and go online instantly is smooth as silk.

Replay Value – 9.5
There are 75 cars to collect as you upgrade your drivers license from beginner to A class. Getting to 100% of the game will take ages if you play a suggested one or two hours a day, at least over 30 hours total. Add to this the fantastic fun online mode and you’ve got yourself a winner. There’s even Burnout Paradise downloadable content coming up, both free and paid, that unlocks more roads.