Aliens: Colonial Marines revealed by Game Informer for release in 2009 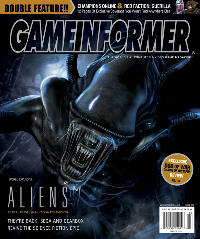 Aliens: Colonial Marines has been revealed by the U.S. Game Informer magazine as it’s exclusive cover-story for next month.

Gearbox Software is the developer behind the game, which is fitting because they know a thing or two about making games with soldiers, as their Brothers in Arms games have even been used to recreate key World War II battles on the History Channel.

With those kind of qualifications, it seems like they’d be the perfect developer to tackle a game about Marines. Make that United States Colonial Marines. Thus Aliens: Colonial Marines was right up their ally and the new game in the Alien series (as made famous by the Alien and Aliens sci-fi horror films) are set to invade consoles and PCs in 2009.

Game Informer has the world-exclusive first look at the squad-based first-person shooter that aims to recapture the tension and desperation of the earlier films (the ones mentioned above, which are considered the best in the series).

We’ll know more information soon enough, but until then check out the awesome cover-story picture.