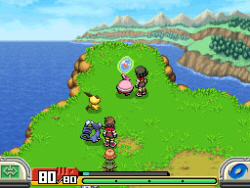 In the upcoming Q2 2008 Nintendo DS game Pokemon Ranger 2, known in Japan as Pokemon Ranger Batonnage, there will be a special mission that after completion will allow for you to send a Riolu Egg or Manaphy Egg to your Pokemon Diamond or Pearl games.

I’m sure you remember how to get the Manaphy Egg in the first Pokemon Ranger game. But Pokemon Ranger 2 lets you get your hands on the Riolu Egg that contains the pre-evolved form of Lucario. In the Pokemon Diamond and Pearl games there is only one Egg from which Riolu evolves and that is given to you after you’ve completed the Iron Island maze and defeated the Galactic Grunts. It evolves through Happiness in the daytime (4Am to 8PM). It says in the Pokedex that Riolu can use “aura” to project its emotions and feelings.

For more screenshots go to Impress. — Thanks for the tip Joe