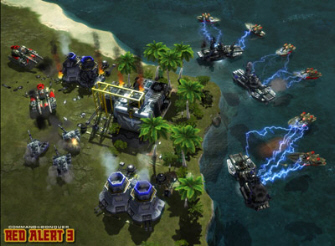 After a seven-year hiatus, Electronic Arts today announced the return of Red Alert with Command & Conquer: Red Alert 3, for the PC, Xbox 360 and PlayStation 3. As one of the most beloved and best-selling real time strategy (RTS) series of all time, Red Alert takes players on an epic adventure to a breathtaking alternate future spawned by time travel run amok. Developed by EA Los Angeles, Red Alert 3 breaks new ground in the RTS genre, featuring a fully co-operative campaign while bringing back the series’ light-hearted style and classic, action-oriented gameplay.

In Red Alert 3, the desperate leadership of a doomed Soviet Union travels back in time to change history and restore the glory of Mother Russia. The time travel mission goes awry, creating an alternate timeline where technology has followed an entirely different evolution, a new superpower has been thrust on to the world stage, and World War III is raging. The Empire of the Rising Sun has risen in the East, making World War III a three-way struggle between the Soviets, the Allies, and the Empire with armies fielding wacky andwonderful weapons and technologies like Tesla coils and troopers, heavily armed Kirov War Blimps, teleportation, armored bears, intelligent dolphins, airfighter-submarine transformers, samurais with laser sabers, Tsunami tanks, Apollo fighters, Century bombers, mobile V4 artilleries, Mirage tanks, floating island fortresses, and transforming tanks. 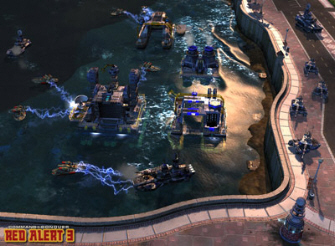 Red Alert 3 asks the question “What If?” What if every bizarre research project and technology experiment for the last 70 years had actually borne fruit? What if the Philadelphia Experiment, time travel theory, teleportation, invisibility, Tesla technology, and a hundred other intriguing research projects had all paid off and gone mainstream? What if the Soviet Union survived and thrived; what would it look like 10 years in the future? What if the Japanese Empire had never fallen and instead became the ultimate high-tech military superpower? The end result is an imaginative and playful vision of an alternate future filled with possibility.

For fans of Red Alert and Command & Conquer, EA hosts a dedicated online Web cast BattleCast Primetime, the latest video on Command & Conquer TV the Red Alert 3 executive producer Chris Corry explains more about the game saying “We’ve actually been working on designs for this game for the past several years.” And more importantly he said “The entire campaign is designed around the ability to play it co-operatively with your friends, and for those people who want to play by themselves there’ll be custom AI generals with different personalities that you’ll be able to fight alongside with.” Find out more in this video:


“The Red Alert games are known for challenging hardcore strategy gamers with depth, variety, and innovative gameplay. But they also belong to that rare breed of games that can draw in more casual players with their over-the-top stories, instantly accessible mechanics, and straight-to-the-fun design,” said Mike Verdu, General Manager of EALA. “With Red Alert 3, our team is continuing that proud tradition by introducing genre-first features like co-operative campaign play, which rewards veterans and casual players alike. In Red Alert 3, friends and family can always have your back!”

“It’s been too long.” said Chris Corry, Executive Producer at EALA. “Fans have been waiting for a new Red Alert game for seven years, and we’re working hard to ensure its well worth the wait. The team is staying true to the series’ roots while adding new elements like a co-operatively played story-driven campaign, an astounding new faction that will shake-up the Red Alert universe as we know it, and units that will help make Red Alert 3 everything our fans have been waiting for. And by bringing naval combat into the heart of the game design, we’re transporting that fast, fun and fluid C&C gameplay to the high-seas in ways that you’ve never seen before.” 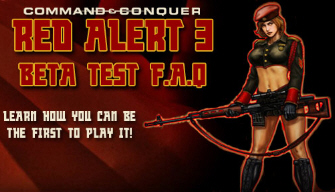 Q: How do I get into the Red Alert 3 Beta Program?
A: By purchasing a copy of Command & Conquer 3: Kane’s Wrath that has a “C&C Red Alert 3 Beta Key” callout or sticker, you will have the opportunity to enter into the RA3 Beta Key program. Each copy of Kane’s Wrath with the Beta Callout will have an insert to enter into the RA3 Beta Program and a unique code. If you visit the designated website on the insert, enter your unique code and user information before September 15, 2008. You will be entered into the beta queue. The sooner you register on the website, the higher your place in the beta queue.

Q: Is the RA3 Beta Key Program Tied to Pre-ordering Kane’s Wrath?
A: No, but the sooner you purchase Kane’s Wrath and register online for the beta key (by following the instructions on the Beta Key insert) the more likely you are to get access to the Beta before anyone else

Q: When will the Red Alert 3 Beta begin?
A: We’ll be rolling out more details on the dates of the Red Alert 3 Beta at a later time, but the sooner you register online with your unique code from Kane’s Wrath, the better your chances are of entering the Beta before anyone else

Q: Does every copy of Kane’s Wrath and Command & Conquer 3 Limited Collection contain the Red Alert 3 Beta Key insert?
A: There are some countries that will not be participating, so check your local country’s EA website for details. In North America, every single copy of Kane’s Wrath and the Command & Conquer 3 Limited Collection will contain the special invitation to the Red Alert 3 Beta Program if you purchase before September 15th. If you’re not sure about your countries level of participation, look for the Red Alert 3 callout on the packaging in your country. If you see the Red Alert 3 callout, you’re safe!

Q: How do I guarantee that I get to be the first one in the Red Alert 3 Beta Program?
A: Be one of the first people to purchase Kane’s Wrath and register your unique Red Alert 3 Beta Key on the designated website. Depending on when you registered and where you are located, you will be sent an invitation in a priority order.