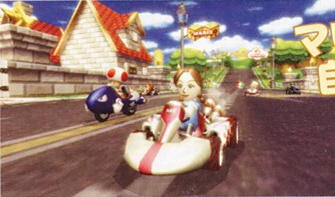 Mario Kart Wii is expected to debut in Japan on April 10th, 2008. This bodes well for a worldwide release in April, since Mario Kart: Double Dash on GameCube was released in America, Canada, Europe and Australia within two weeks after the Japanese launch. The Japanese gaming magazine Famitsu covers the game in their latest issue. Let’s list the course and other details they talk about:

* You’ll be able to make your very own Mii ride a bike or kart, playing as your Mii adds more personality to online races (see above screenshot).
* There’s a total of 32 courses, with 16 remakes of old courses, and 16 completely new courses.
* Some of these courses in the cup mode will put a new feature of the karts to use: mid-air tricks! Karts and bikes are both capable of performing actions and tricks in the air like a “wheelie”. Get a trick just right, and your cart will perform a dash upon landing. 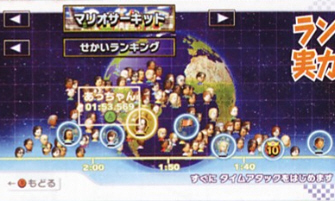 * The game will include Wi-Fi based online play for up to 12 players. You’ll be able to select to play against players from throughout the world, players in your country, and players on your friend list (see above screenshot). This screenshot also shows a green A button and a red B button, which might indicate GameCube controller support.
* You’ll be able to install a Mario Kart Channel to your Wii hub to view world rankings, online leagues, as well as your own records.
* The online mode will also expand the single player fun. The game will offer downloadable ghost data (time attack scores), so you can play against some of the best players. These time attack scores will have their own online ranking too.
* Of course there’s still the option for local multiplayer via split screen for up to four players.

Here’s a list of the new and remade courses revealed so far:

You can view screenshots from all these stages by clicking on the thumbnail Famitsu scans to the right of the list. — Via Neogaf