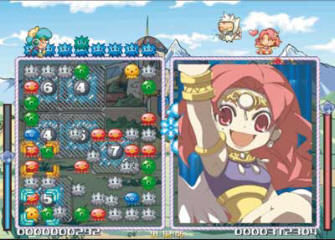 Atlus has announced Octomania for Wii. With a release date of March 11th, Atlus is set to break their traditional mold of publishing RPGs to bring a very unique game to the Wii audience in North America at the budget price of $19.99.

* Encounter zany foes on your quest to rid Lonronpia of octopi! Story mode takes you to multiple locales to battle a variety of clever and humorous opponents, while Arcade mode lets you jump straight into the action. You can even opt to play in “Endless mode,” where it’s all about how long you can hang in there before your screen fills up.
* Local head-to-head and Nintendo Wi-Fi Connection multiplayer modes! Whether you’re playing alone, alongside a friend, or against a random player online, the fast-paced puzzle gameplay is always a blast! Two players can face off online, and up to four players can play in local multiplayer.
* Tons of content for a great price! Combo chains, special attacks, multiple difficulty levels… Experienced gamers will find a lot to enjoy, but newcomers will find just as much fun to be had. And with the included tutorial mode, anyone can pick it up and play!
* Storyline: On a peaceful day in the land of Lonronpia, Kari, an apprentice magician, is summoning up her favorite treat. When her spell goes horribly awry, hundreds of thousands of colored octopi suddenly rain down from the clouds. A guardian angel appears before her, asking Kari to rid the land of the octopi and undo the damage of her failed spell.

Octomania should be a real treat for anime-fans with it’s cast of zany characters, story mischief and anime feel that the whole family can enjoy. And with challenging puzzle gameplay, a variety of different play modes and online multiplayer via Nintendo Wi-Fi Connection, what’s not to love? Hopefully this game will sell enough to justify the release of other Japanese Wii games to Western shores.

Check out some videos of gameplay and the intro for the Japanese version.