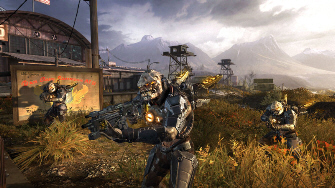 Sony has released a few Resistance 2 screenshots for you PS3 fans to ogle. As you might know, the sequel continues the story after the first game. The Black Ops aircraft carrying Sgt. Nathan Hale is shot down over Iceland. Hale escapes to the United States and becomes part of a program known as Sentinels, a group of soldiers that, like Hale, are resistant to the Chimera virus. Two years after arriving Stateside, the Chimera launch a full-scale invasion on both the east and west coasts of the United States.

Check out what the scope of this Chimera invasion entails in the following Resistance 2 screenshots. (click on each thumbnail to enlarge the screenshot)