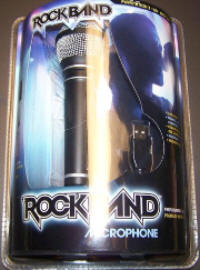 The official Rock Band microphone from Harmonix has silently hit retail stores and thus is now available for purchase for a cool $50 bucks. Expensive yes, but for dropping that amount of cash you get a heftier, sturdier, and overall higher quality microphone than the standard one that the game ships with, for those few Rock Band singers that take your vocals very seriously.

But the most interesting part isn’t the fact that the first stand-alone Rock Band instrument is finally available (although in limited supplies), but the fact that the package apparently says it can be used “For PS3, Wii and Xbox 360”. Wii, eh? That would be a new development because if you recall, Rock Band has only released for Xbox 360 and Playstation 3, even though the developers have mentioned that they’d like to make a Wii version.

So is this unofficial confirmation? It would seem so. They certainly can’t deny a game as huge as Rock Band for the best-selling system, so we’ll surely get some official news sooner or later. — Via Engadget